The Yorkshire Artists (Part IV) is a celebration of work from 5 contemporary artists who are all either living or working in Yorkshire.

This exhibition is a continuation of the series of group shows started in 2012 with the intention of allowing new and upcoming artists to exhibit alongside more established names. Shows from this series will continue throughout 2013, with the fifth (and final) installment later in 2013. 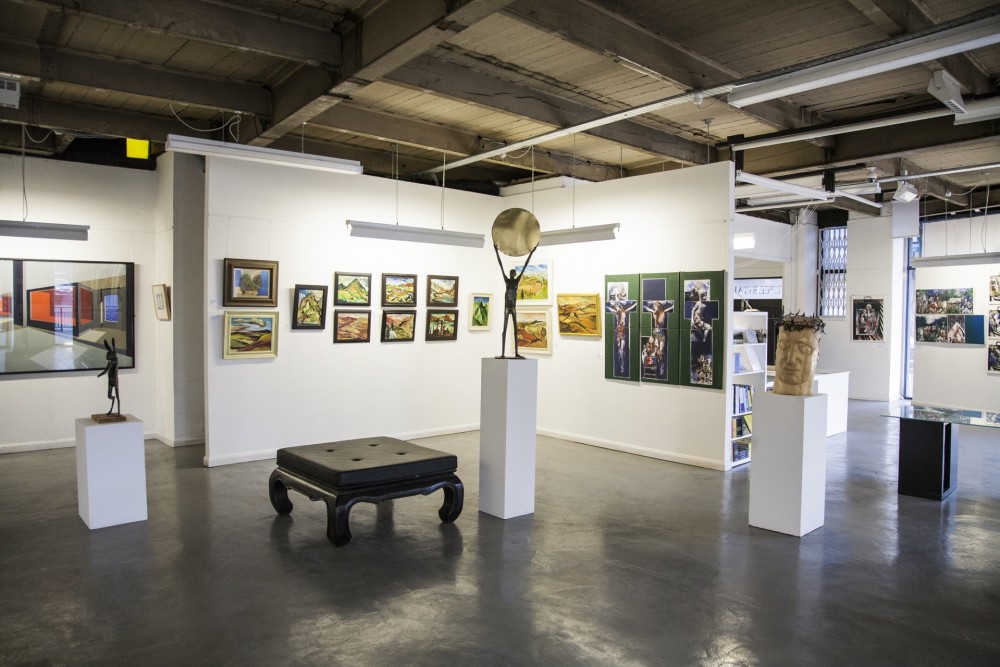 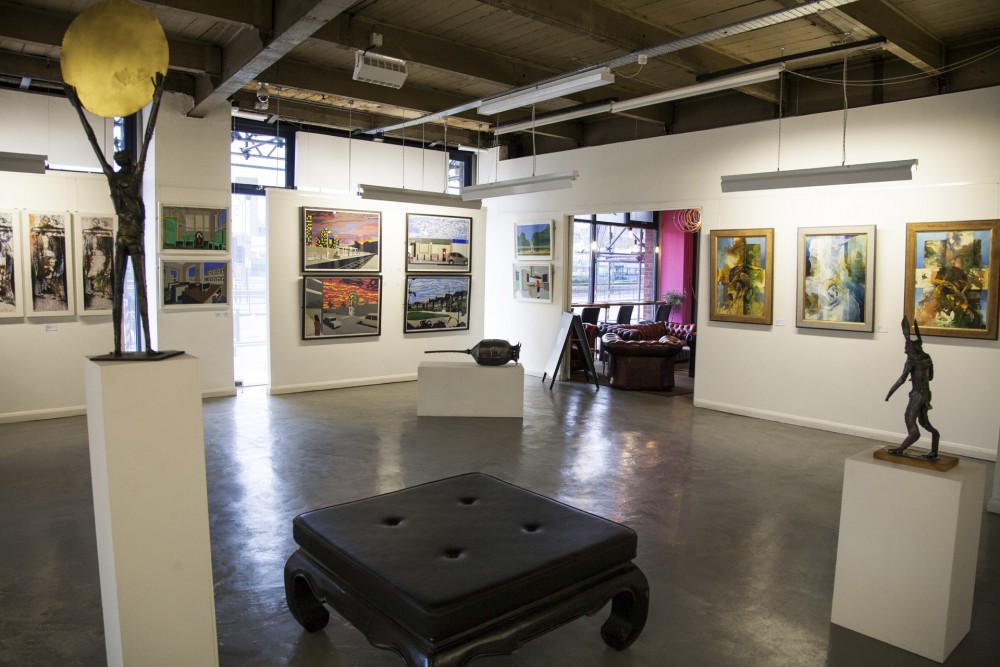 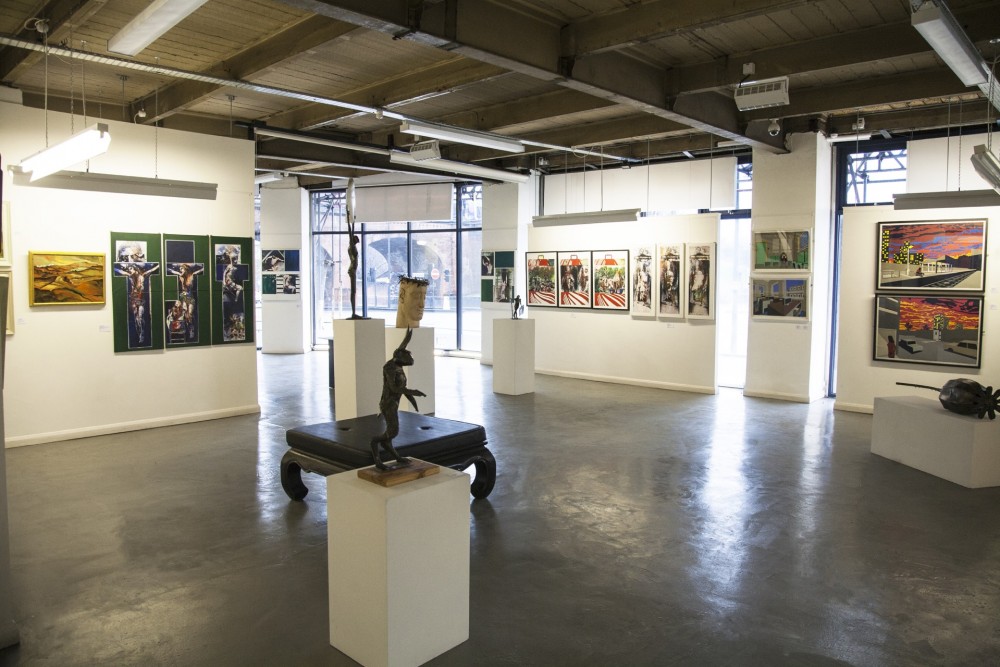 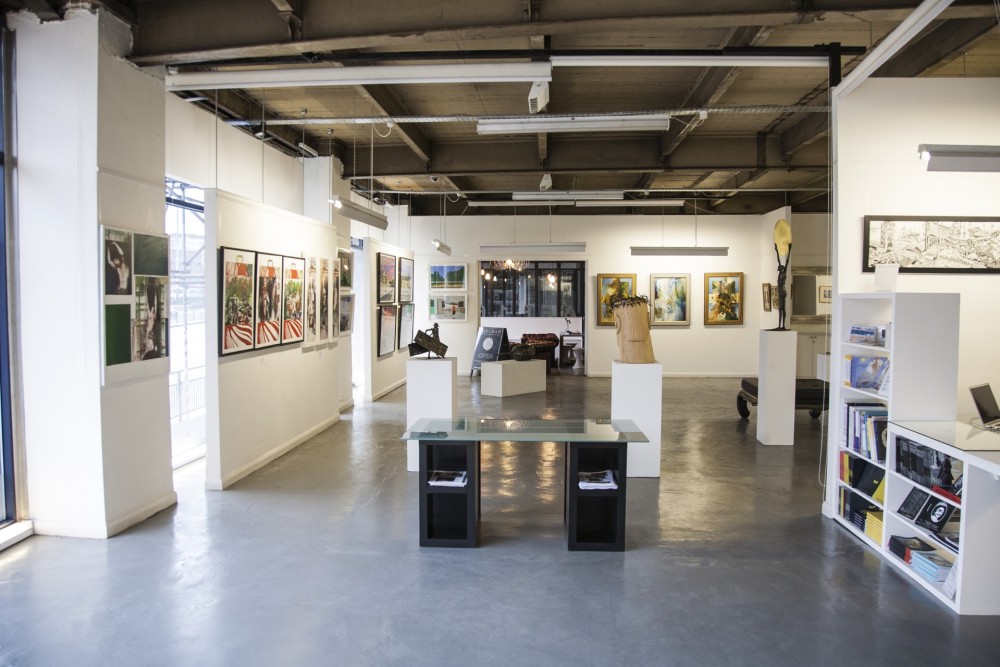 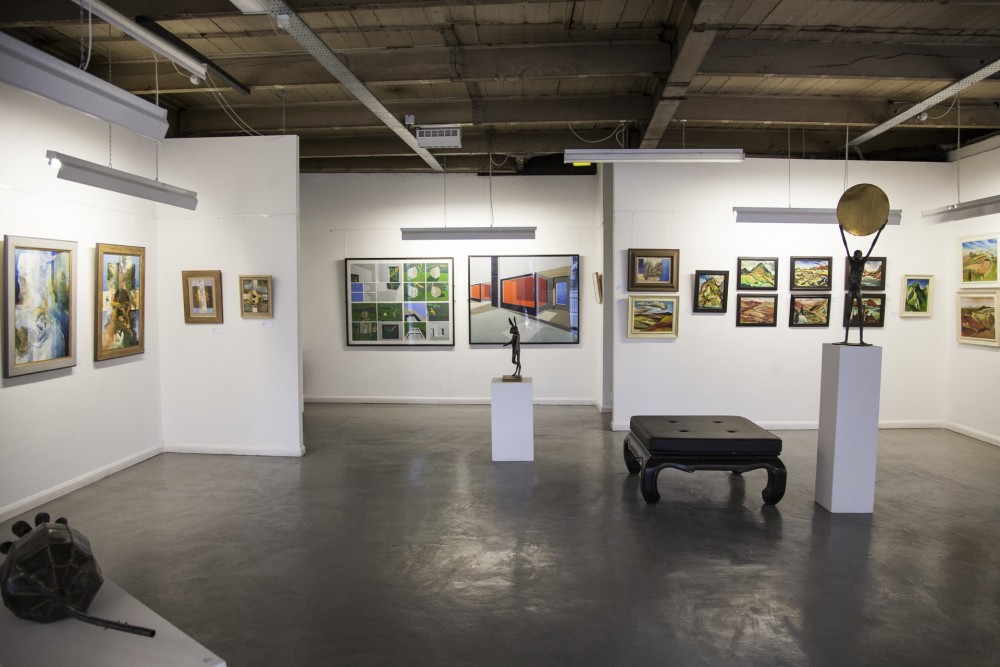 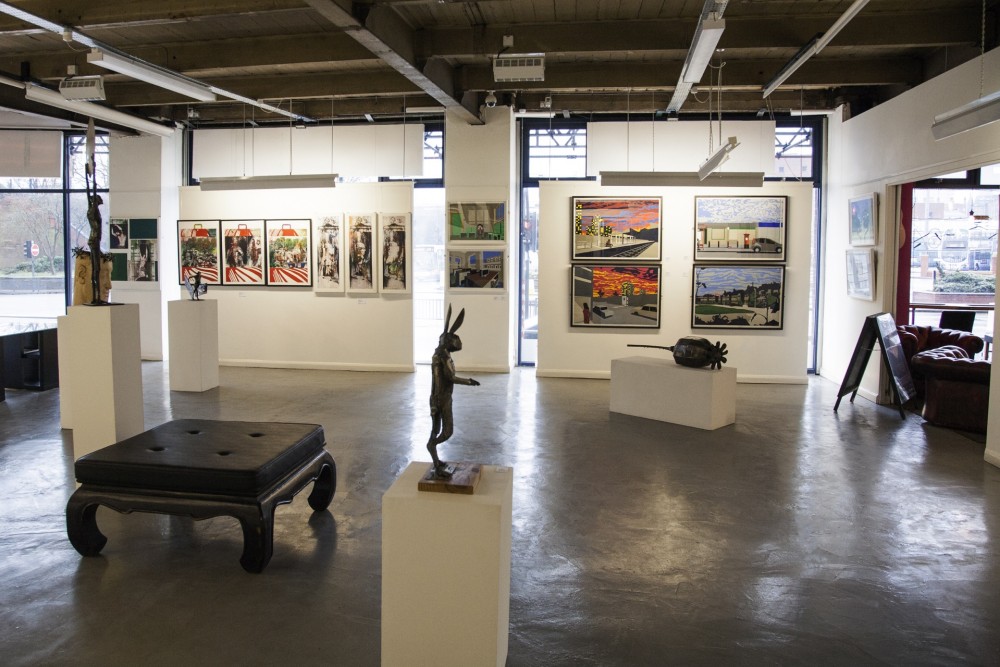 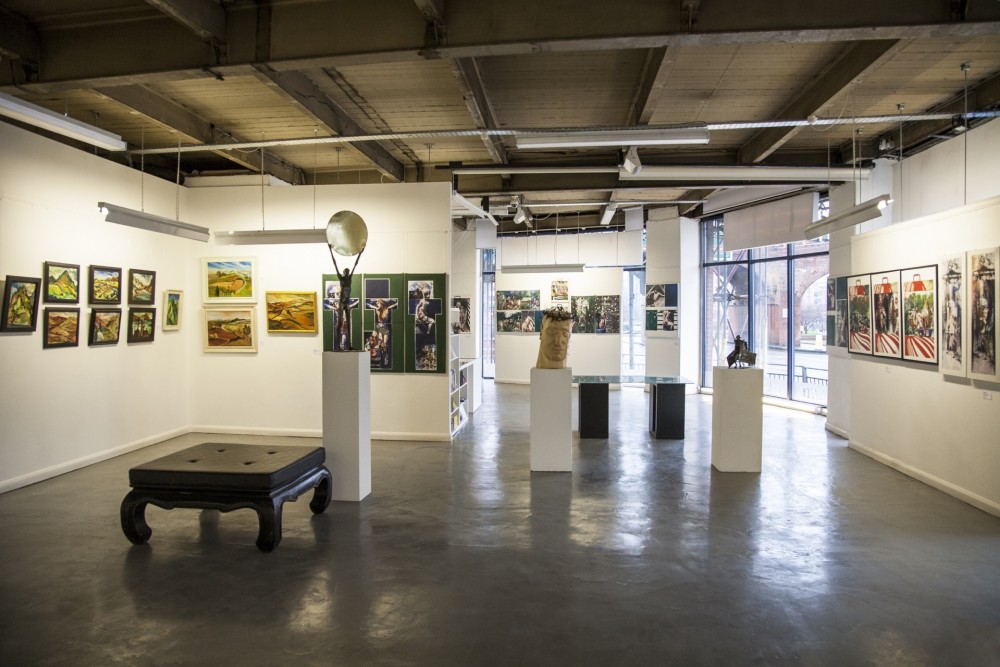 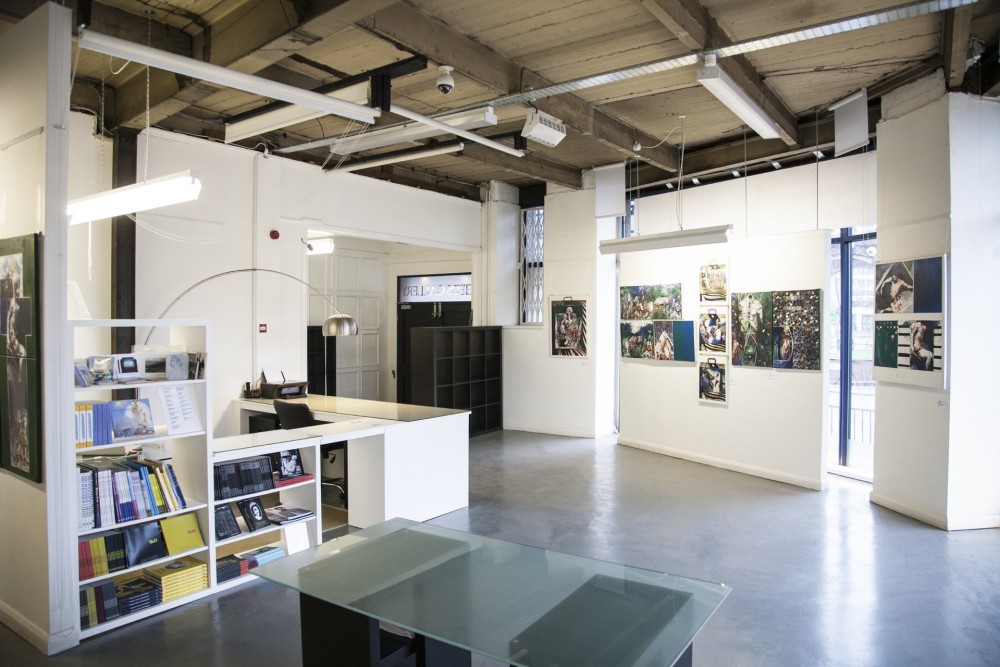 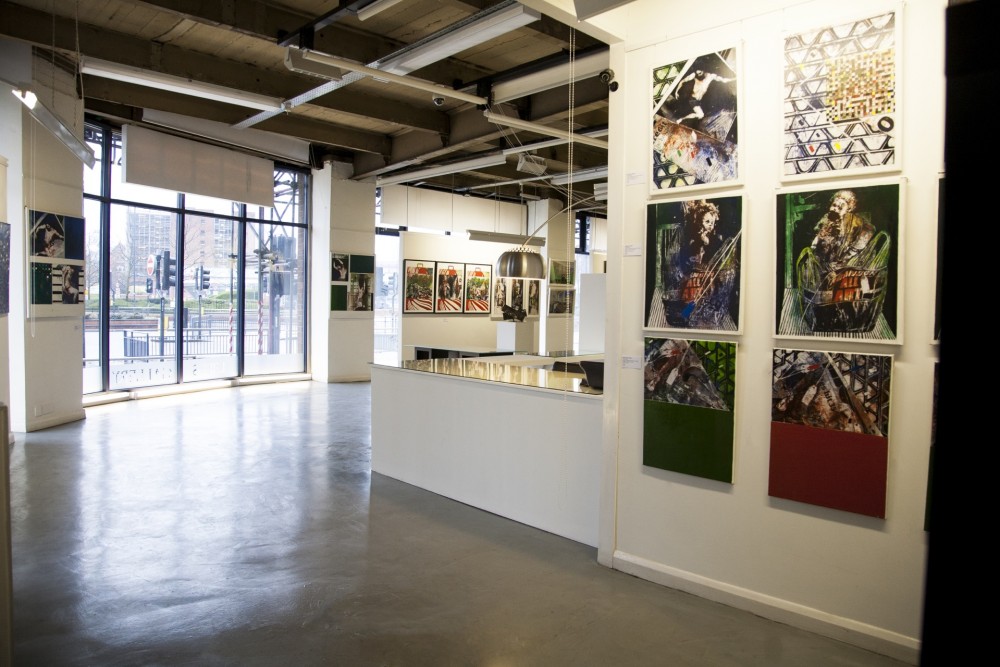 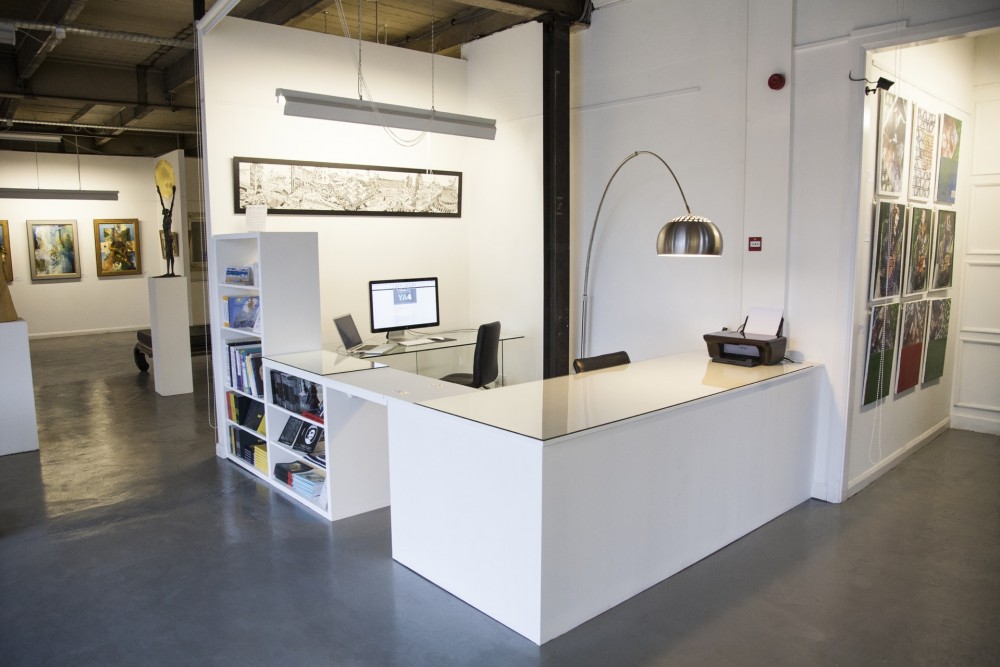 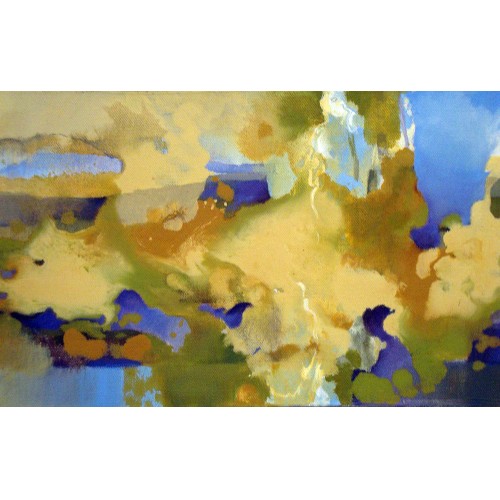 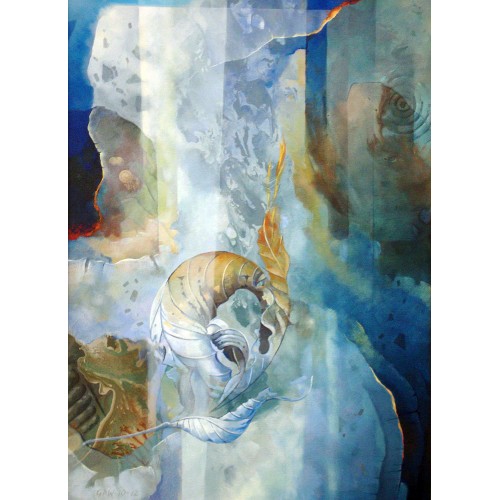 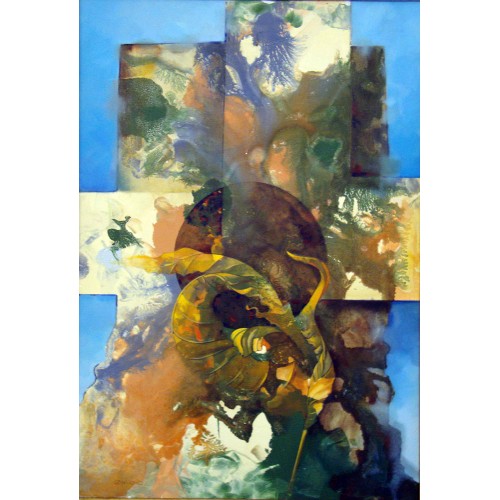 "The force that through the green fuse drives..." I 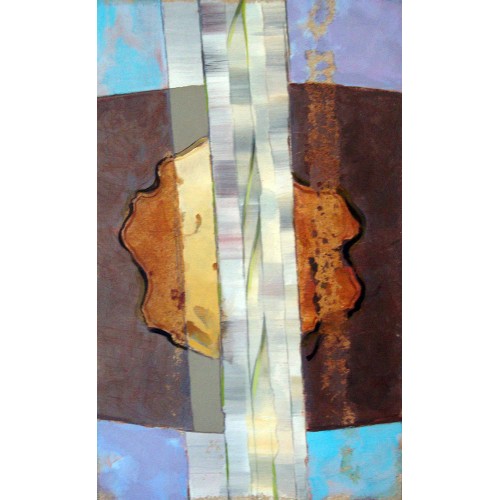 Elegy for a Tree Trunk II 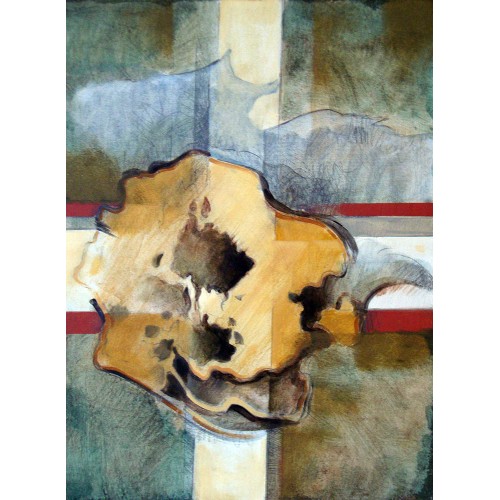 Elegy for a Tree Trunk I 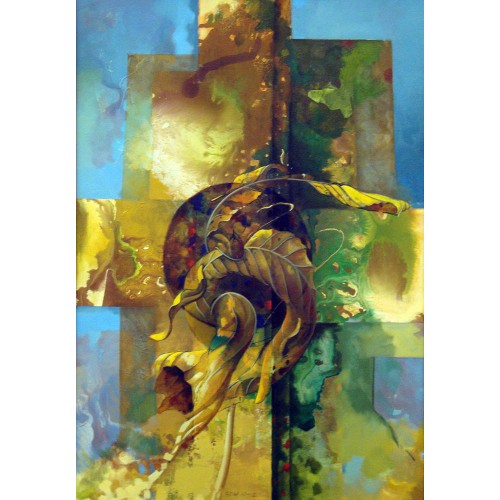 "The force that through the green fuse drives..." II 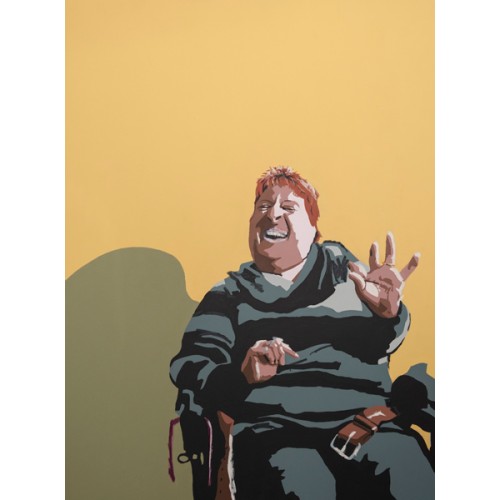 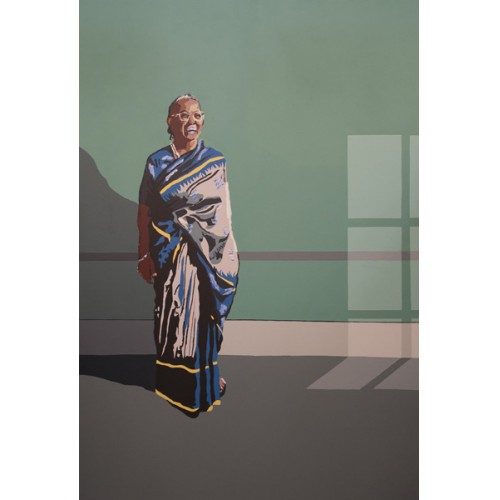 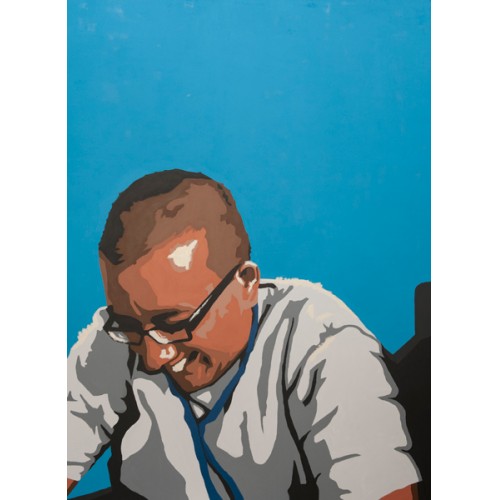 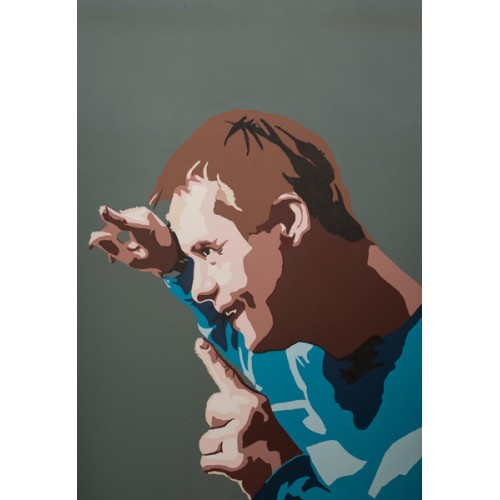 Samson and the Gates of Gaza

Diptych Figures Through The Prism Of Mondrian 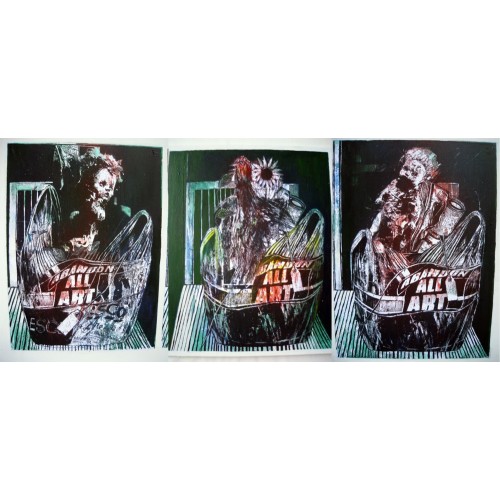 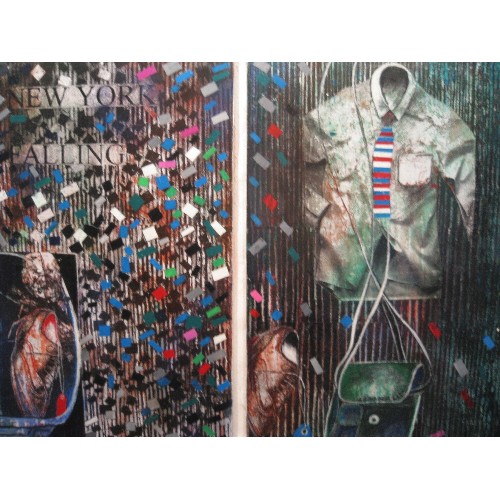 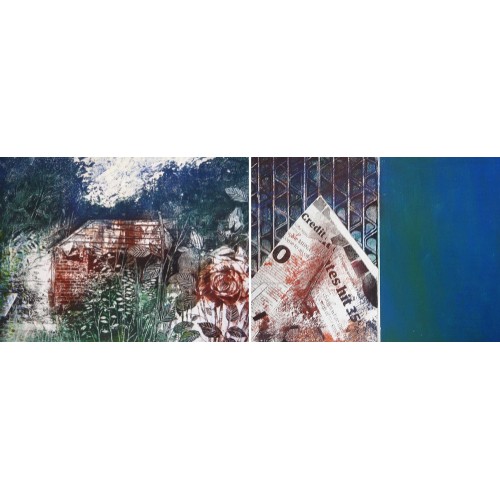 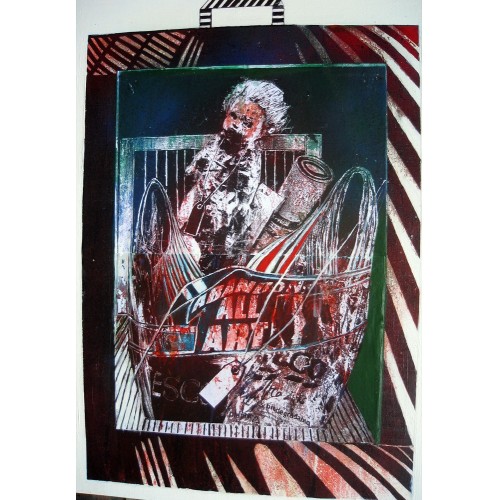 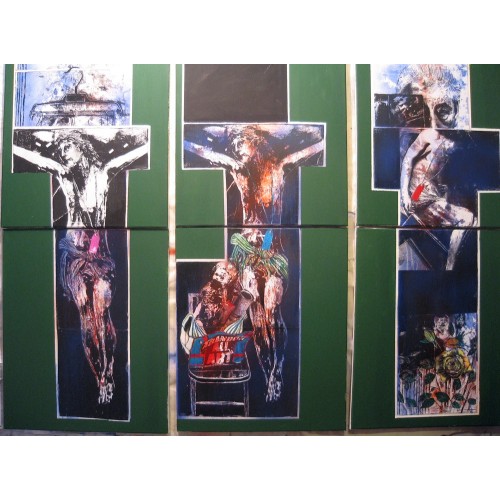 Weathering, decay, fluidity and life-cycles; these are some of the qualities which may be found in the work of Graeme Willson, who is as well known for his public art as he is for his smaller, studio-based pieces.. And in trying to convey these qualities, the artist will often resort to techniques which may be more familiar to abstract expressionist painters: the flow of paint, the chance encounters of different colours and textures; and a feeling for the process of the painters craft which may act as an equivalent for the processes of nature.

Within the natural world, these processes may, at first, be experienced as arbitrary: the fall of rainwater, the action of wind and sunlight. But we are simultaneously aware of physical and biological laws, and we often experience ‘nature’ through a man-made framework: a farmer’s field pattern or the cultural legacy of poetry and the decorative arts. Willson’s work encompasses many of these characteristics, resulting in images that tread a fine line between the abstract and the figurative. For example, a leaf or a tree trunk emerges from a compositional framework which ‘contains’ a dynamic and painterly matrix. Or is that emergence perhaps a form of de-composition, a return to the matrix?

The refence to a line from a Dylan Thomas poem (‘The force that through the green fuse drives…’) in two of the works is highly appropriate. Both poet and painter engage with the ambiguous forces that permeate nature, and by extension, our human nature.

I am a Leeds based artist and graduated in 1997 from Norwich University College of the Arts. I have work in the Welcome Trust Collection and with private collectors. I have exhibited in including the RBS Gallery, Leeds City Gallery, the Cornerhouse in Manchester and the Saatchi Gallery. I have held residencies in High Royds and Rampton Hospital. I work with drawing, painting and sculpture.

I developed an interest in psychiatric diagnosis whilst on my MA at Bretton Hall in 2001 and have moved towards researching areas involved with Neuro-plasticity, the relationship between the brain and environment. In my practice I aim to capture this and our evolved need for narrative. Experimental Psychologist Bruce Hood argues “that the self – this entity at the centre of our personal universe – is actually just a story, a constructed narrative”. I think we attribute a Self narrative construct in to our creative practice, we can then place any manifestations within a physical space and a consciousness.

I sit on the steering group for the Yorkshire and Humber Contemporary Visual Arts Network. An organisation set up to help stimulate the regions art economy.

I teach in Adult Education for the Workers Education Association. Working in Adult Social Care settings including mental health, people with a disability and socially deprived areas. I also deliver sessional work as a freelance artist.

Although the paintings are figurative, they are not illustrative. They border more towards the organic, attempting to capture images through line and colour rather than photographic representation.

I began studying art at Stockport College and from there, I gained a place at Leeds Polytechnic College of Art, specialising in painting and printmaking. After attaining an honours degree I was accepted on the MA course at the Manchester College of Art.

I have exhibited widely, the most notable being one-man exhibitions in London , Leeds Polytechnic, Cartwright Hall Bradford and the Dean Clough Gallery in Halifax.

During the past 20 years, I have been awarded 6 Yorkshire Arts Grants, the most recent being in June 2000.

Born 1937 in Manchester, brought up in Preston, Ian Thompson trained at the Regional College of Art, Manchester. He taught in Comprehensive schools in Preston, initially in charge of three-dimensional art and design then as Head of Department. At the end of a career in teacher education he became Director of the School of Creative Arts in Education in the Birmingham Polytechnic Faculty of Education. In 1987 Thompson chose to retire from teaching to work full-time as an artist. Elected to the Manchester Academy of Fine Arts in 1990, he served as President from 1997-2003. Listed as an approved artist with the Church of England Council for the Care of Churches in 1991 he was invited by the Cathedrals’ Fabric Commission to serve on the Fabric Advisory Committee of Coventry Cathedral. In 1993 he and his family moved to the Yorkshire Pennines. In 1996 Thompson was elected Associate Member of the Royal British Society of Sculptors. Examples of his work, including sculpture in steel and various hardwoods, paintings, textiles and stained glass, are in various collections throughout the UK. Public commissions include altar frontals for churches in Lancashire, banners and frontal in Malvern, banner and stained glass window in Fenstanton, Cambridgeshire, steel Crown of Thorns in Clayton, Manchester, steel sculpture of Risen Christ for St Thomas Becket school, Wakefield and a woodcarving of The Virgin of the Annunciation for St Bede’s RC Church, Weaverham. Municipal galleries in Blackburn and Southport own his work, a painting in oils and a steel Pelican sculpture respectively. A large steel sculpture of the Trinity was purchased for an episcopal church in San Francisco.

Ian Thompson is totally committed to the creative process, no matter what media, skills or themes he employs. Interests include education, wildlife, choral music, religion, calligraphy and the communication that derives from creative expression. He exhibits his work on a regular basis in the Manchester area with the Academy and has from time to time mounted solo or joined selected group exhibitions.

Johnson is probably more well known for her large experimental figurative “sculpture-paintings”, allegorical black and white conté drawings and life-size sculpture executed in collaboration with engineering colleagues at the University of Bradford [“Man and Machine”] where the artist currently lectures. These landscape paintings are nevertheless an important aspect of Johnson’s creative output.

They are instinctive and immediate responses to landscape. Taking her canvas and oils to a particular location, she paints her environment. The understanding of the natural world achieved in these paintings inevitably informs her studio based work.

Johnson grew up in Ilkley and now lives in Bingley but she has also lived in Oxford, where at the University, she studied Italian Art at Corpus Christi College. She then spent seven years in the United States, where, as a Fulbright Scholar, she studied for a Masters in Fine Art at Washington University in St. Louis, Missouri. She subsequently exhibited internationally, most notably in the United States, Italy as well as throughout the UK.

Her work can be found in private collections in England, Italy, Hungary, Japan and the USA.