AFTER SPACE is an exhibition of original paintings by two Leeds-based artists, Jenny Beard and Dan Harland. We have followed both artists for a while, enjoying how differently they work, but also noticing how complimentary their mark making is to one another. With this in mind, we are thrilled be showing their original works together for the first time in our space, many of which are brand-new and being shown for the first time.

We hope that you enjoy Jenny and Dan’s work as much as we do.

All works are for sale, through both the gallery and via the artists directly.

Jenny Beard is a Leeds-based artist working within contemporary painting – her process is built upon automatic drawing, using digital tools to create and manipulate sketches. Read more about Jenny.

Daniel Harland is a painter based in Leeds, transcribing his memories through the smog of re-evaluation and passed time. Read more about Dan. 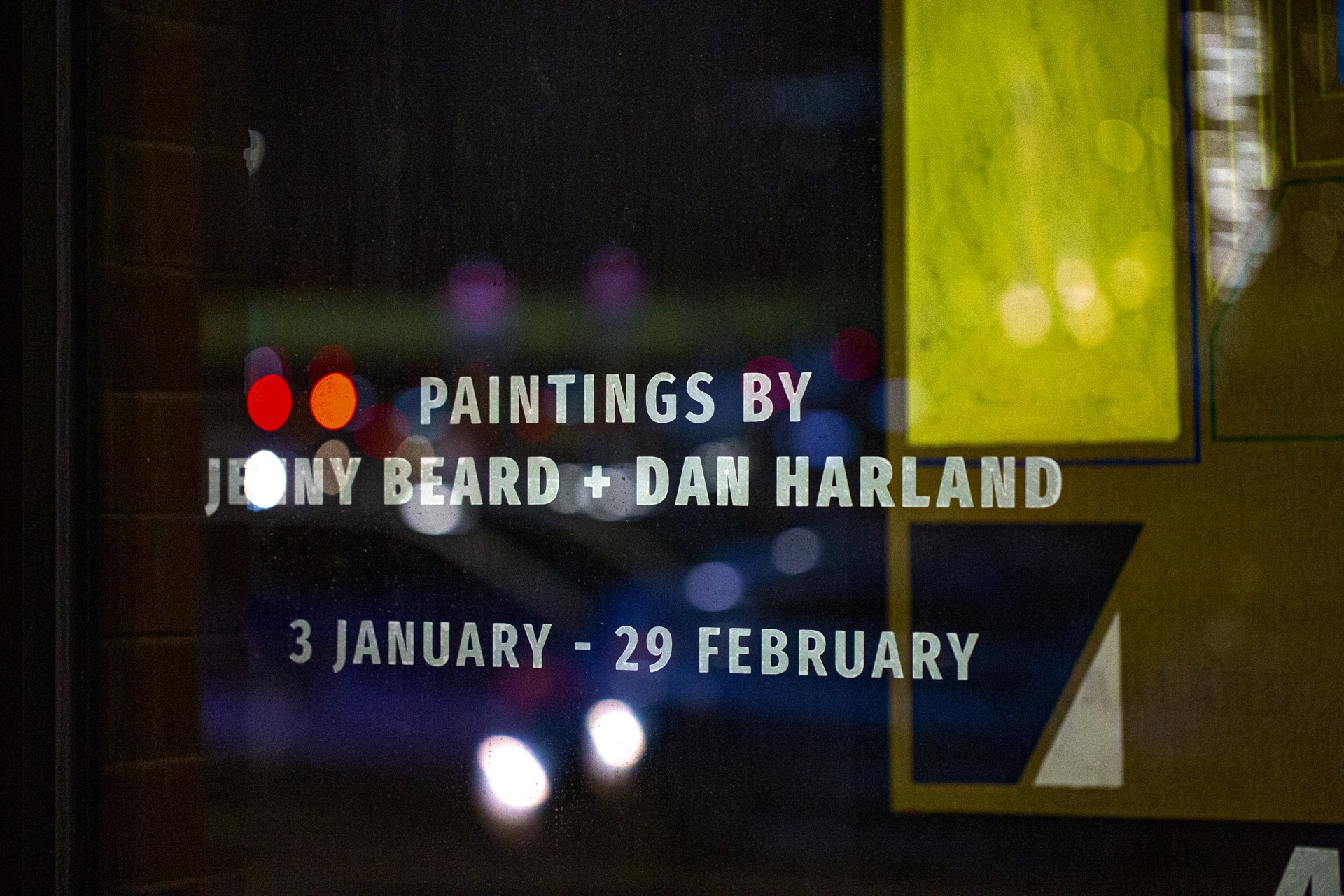 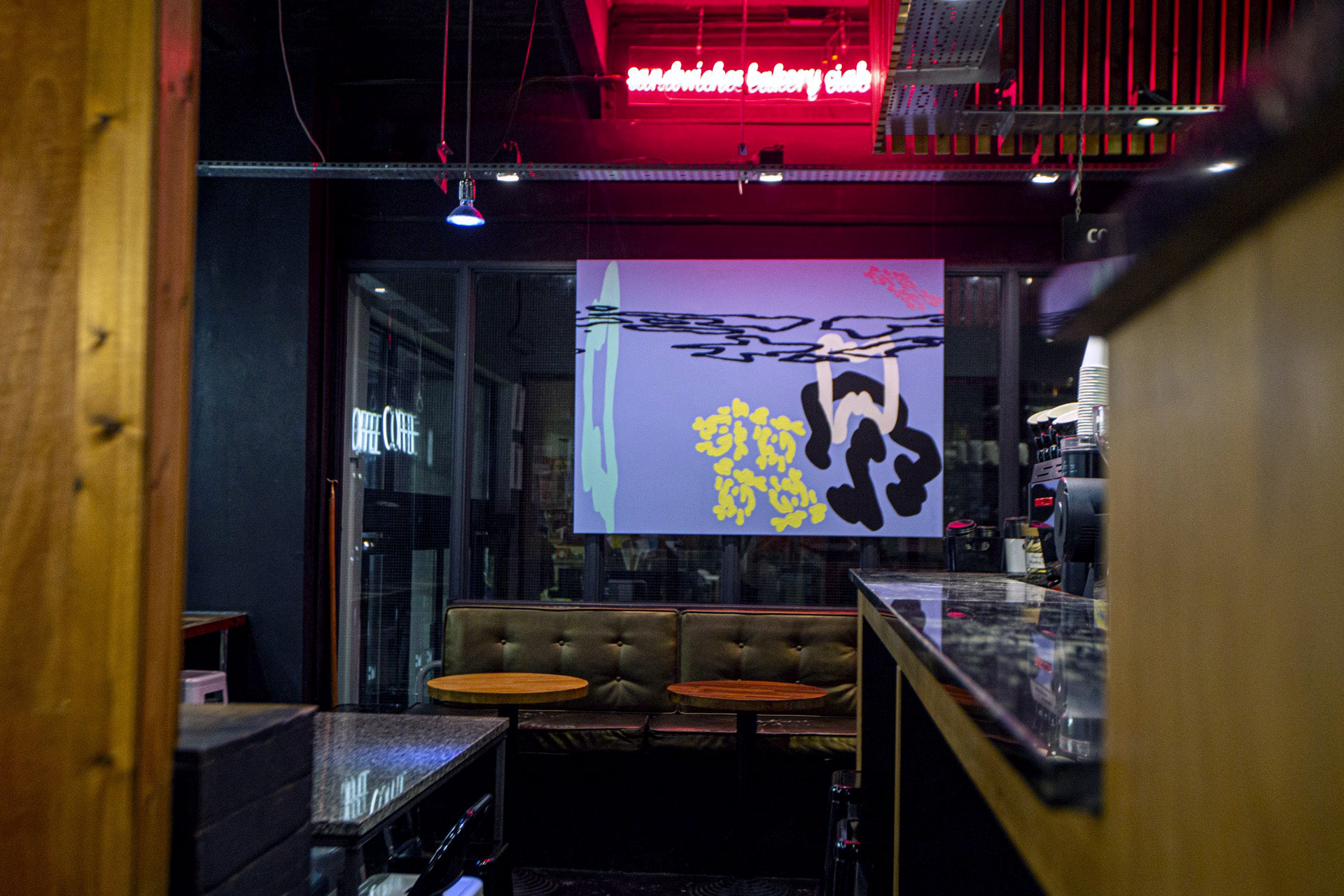 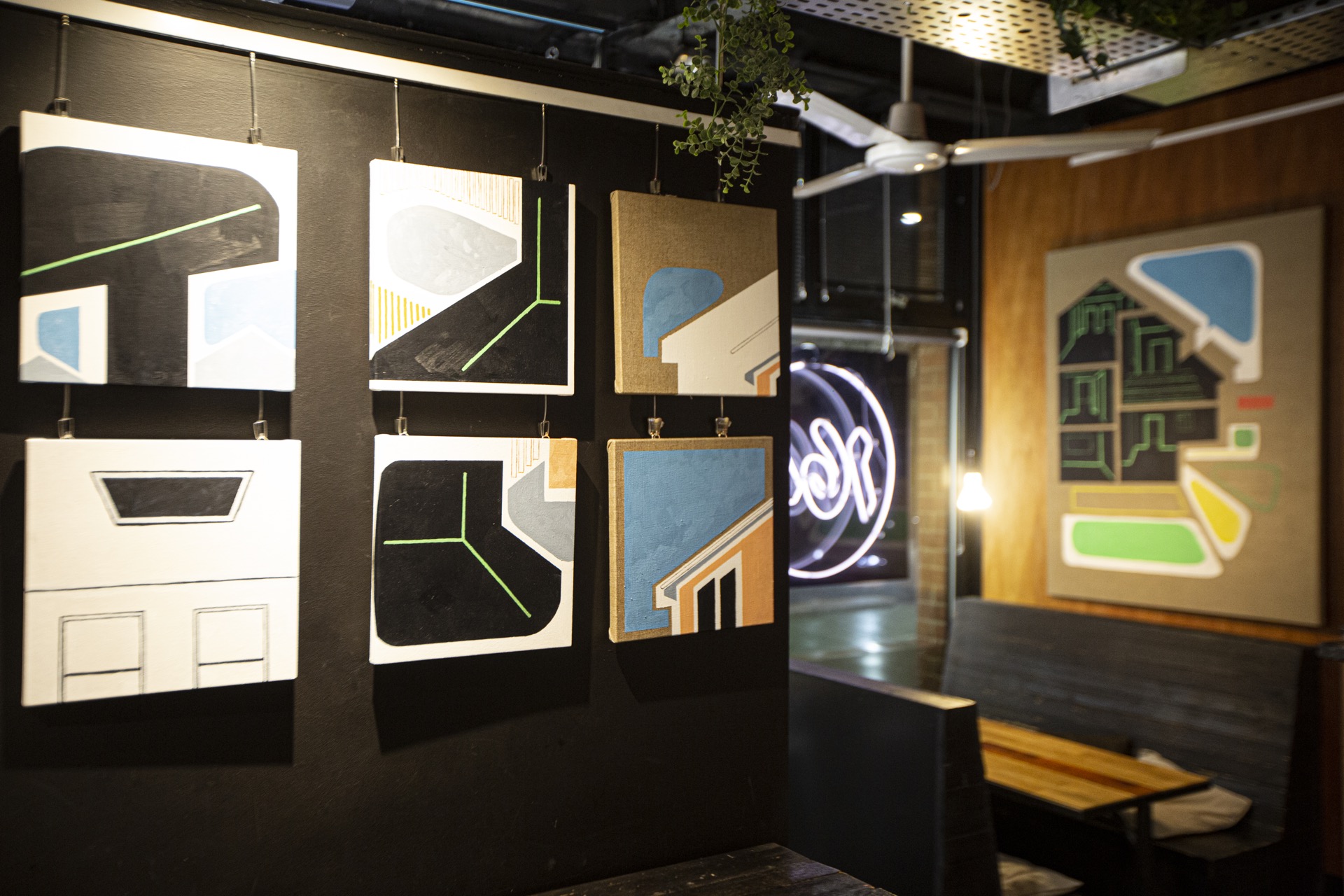 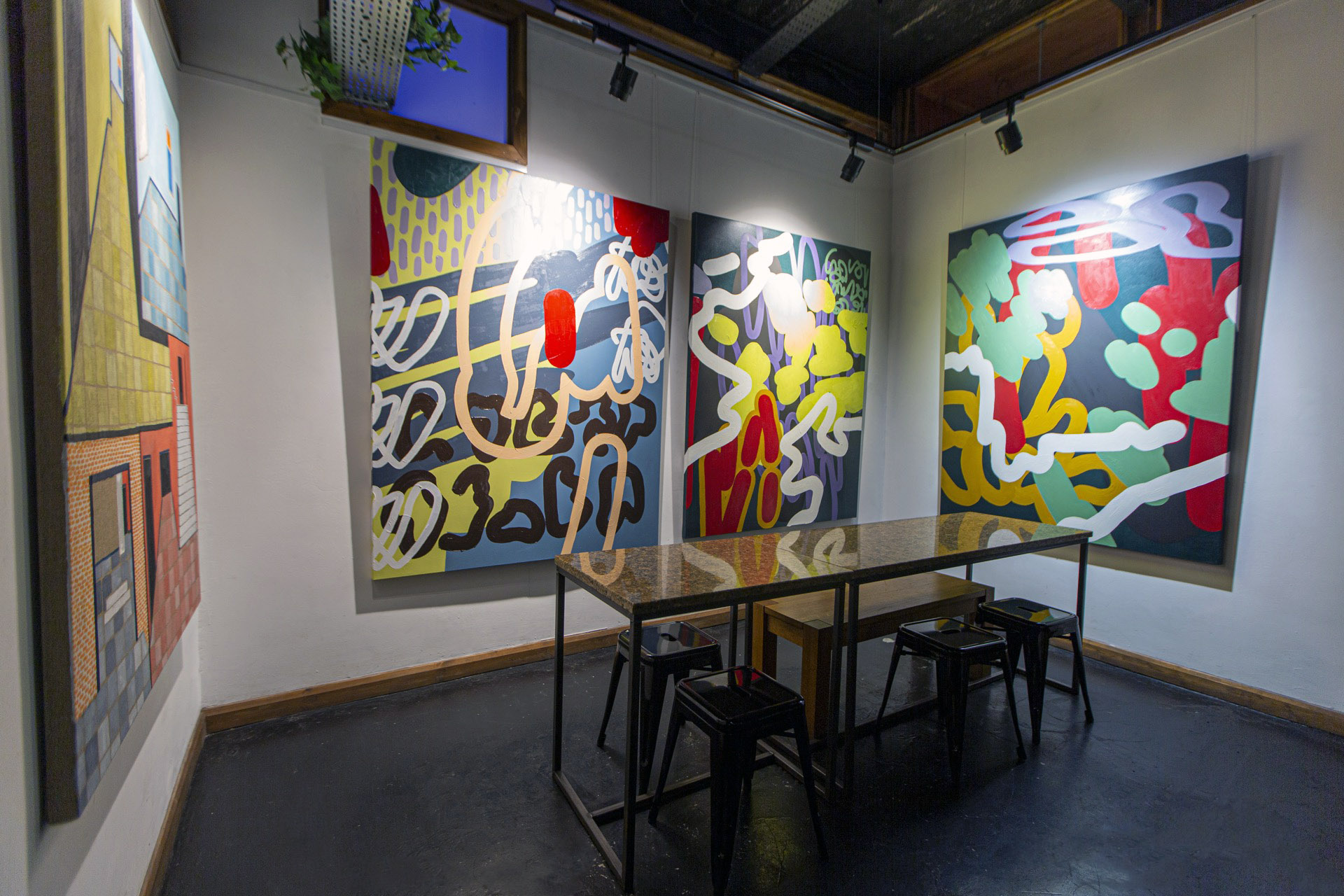 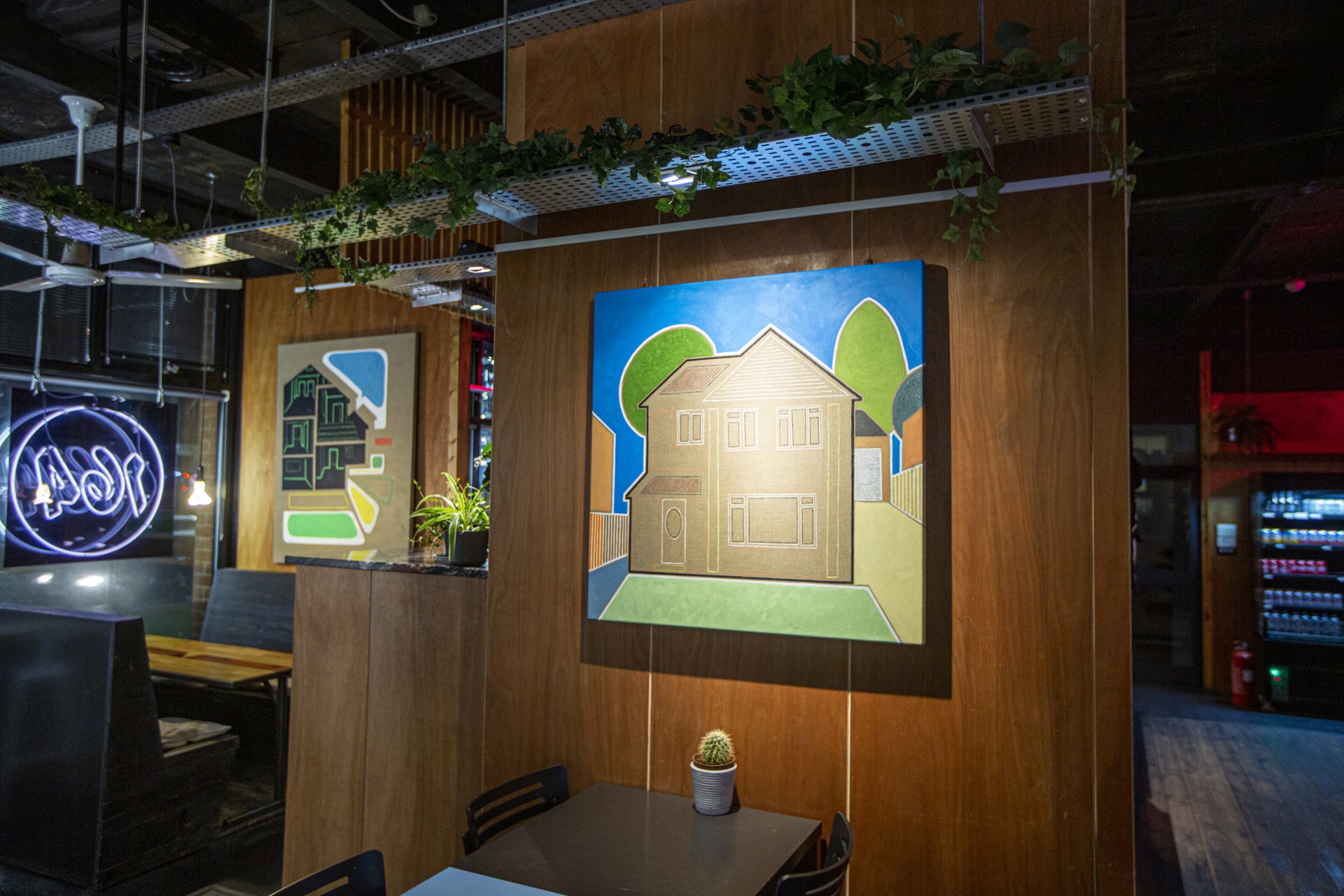 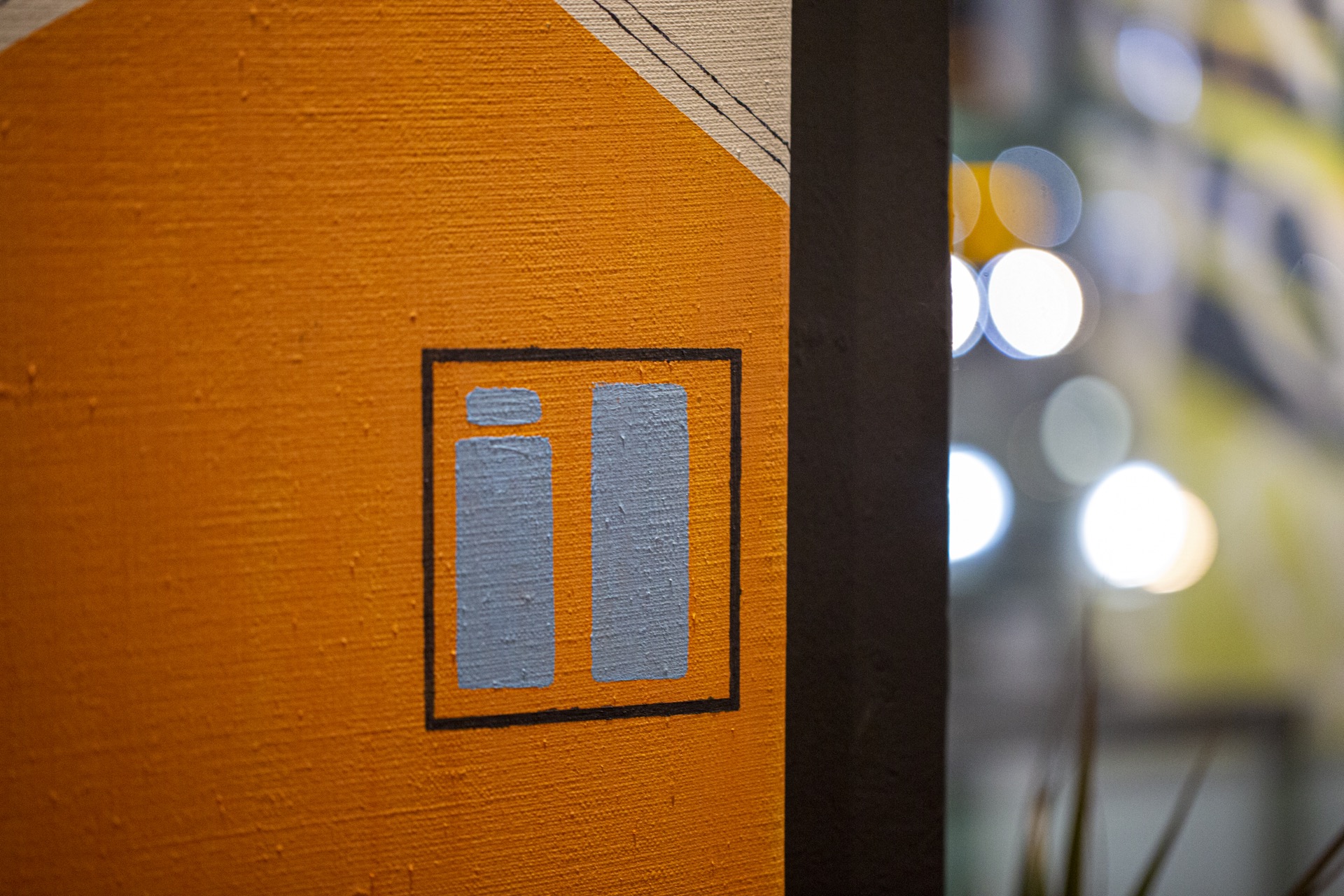 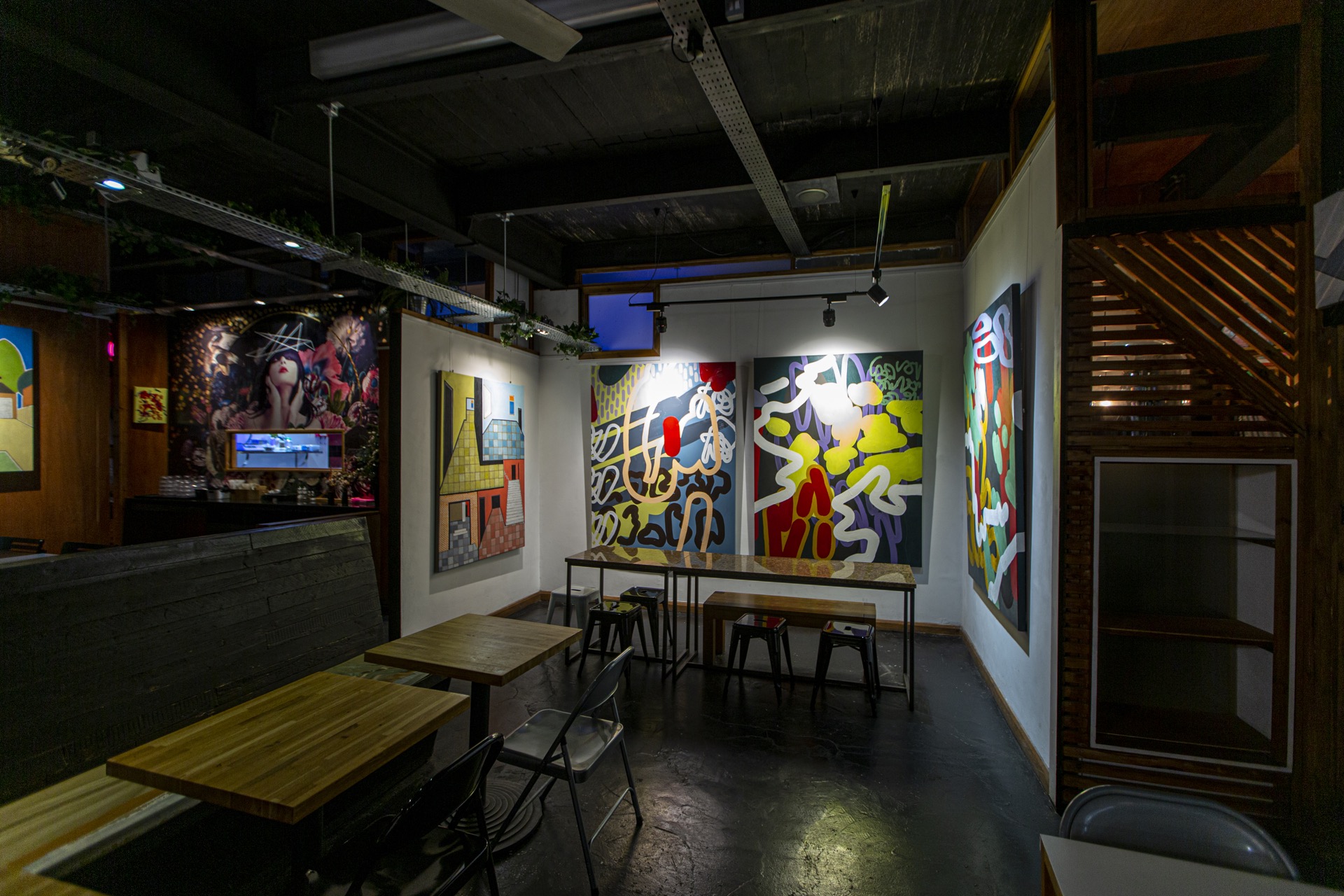 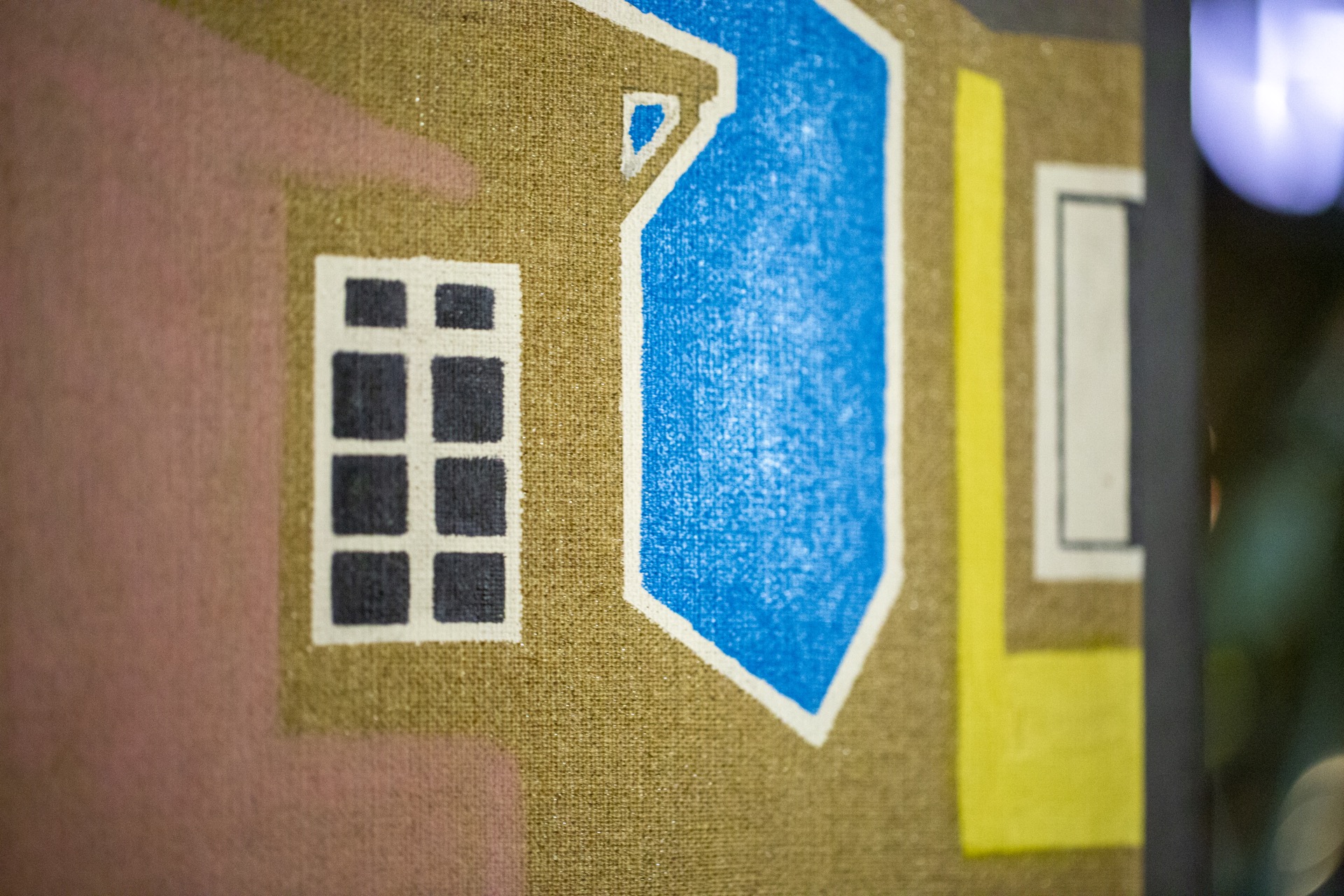 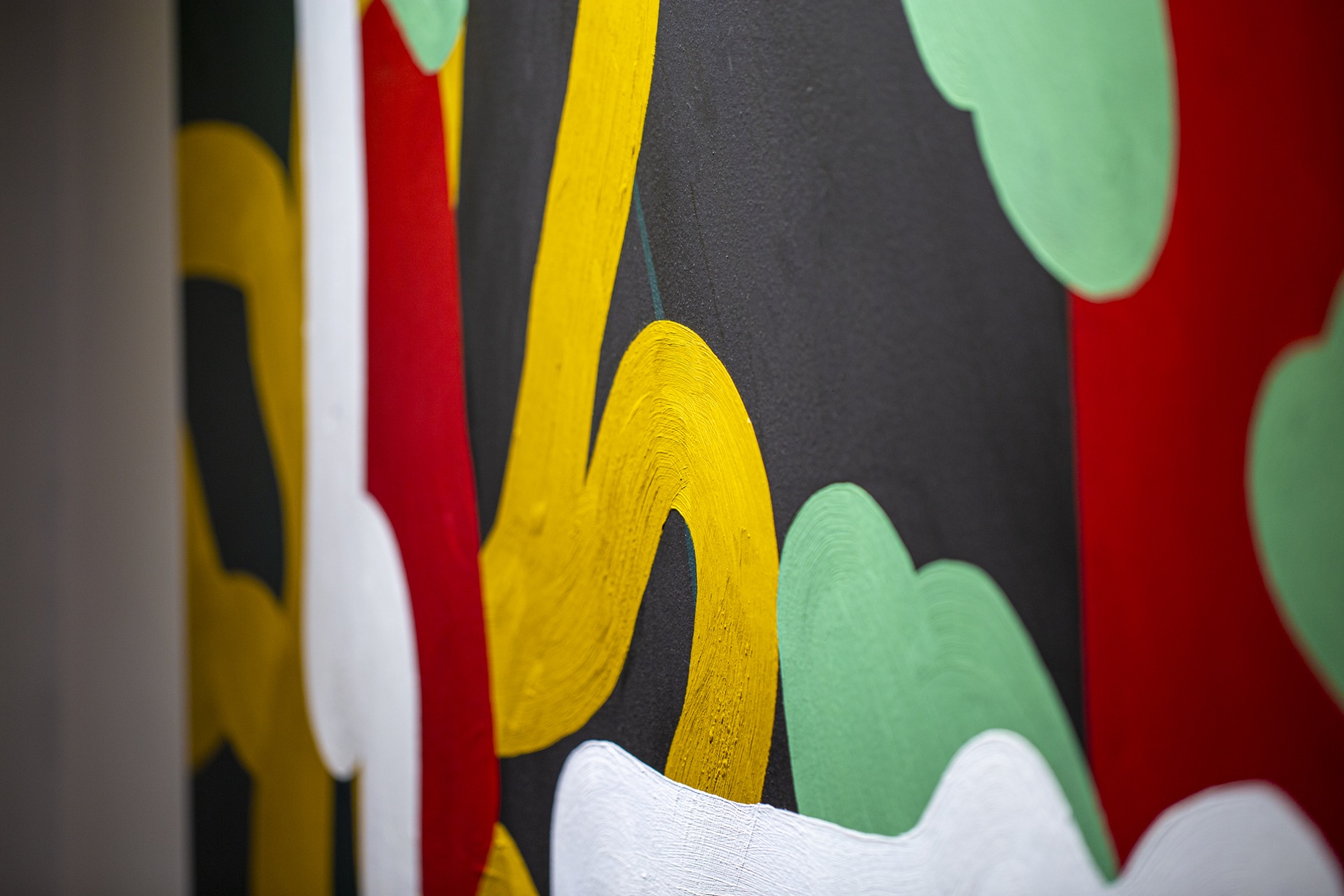 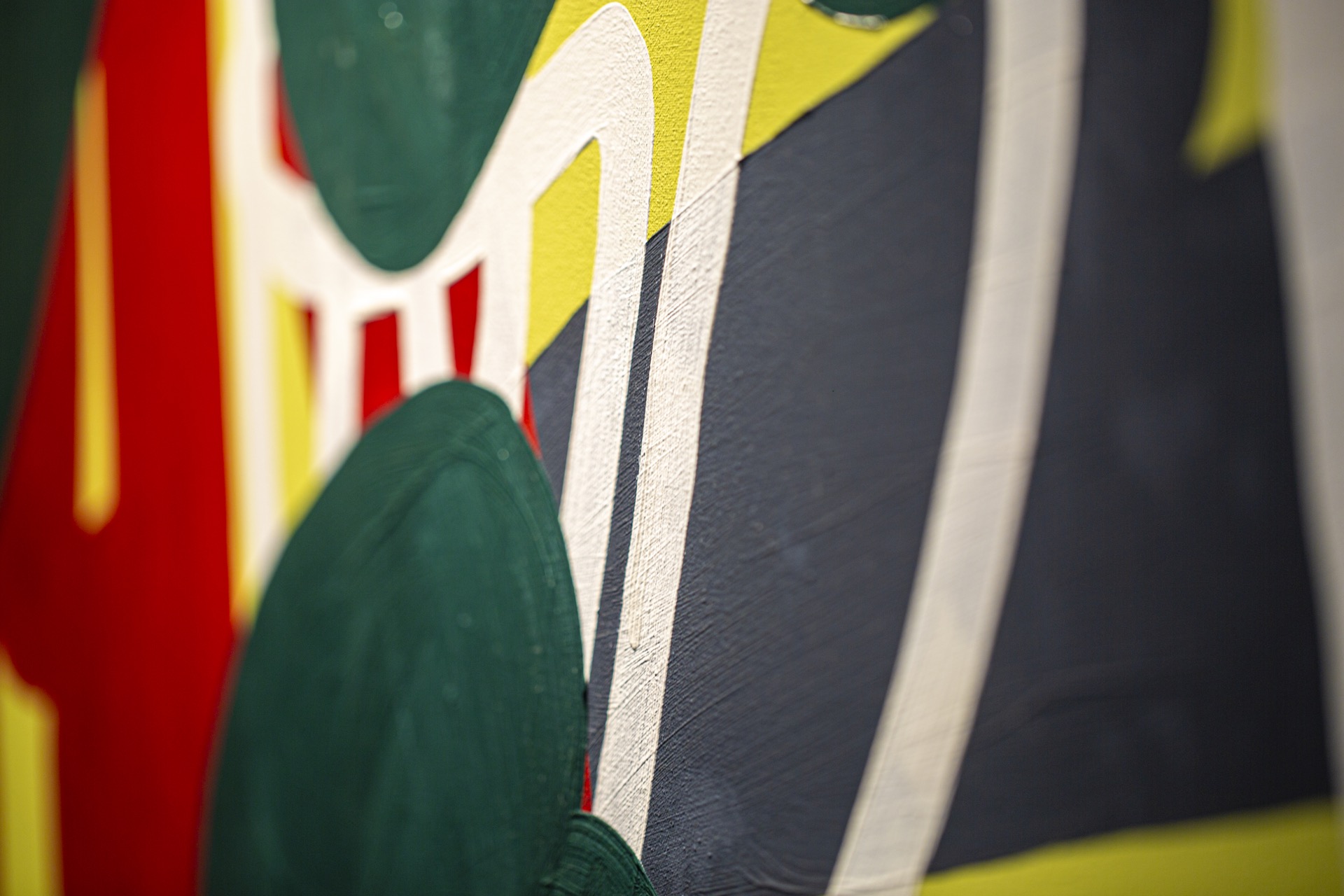 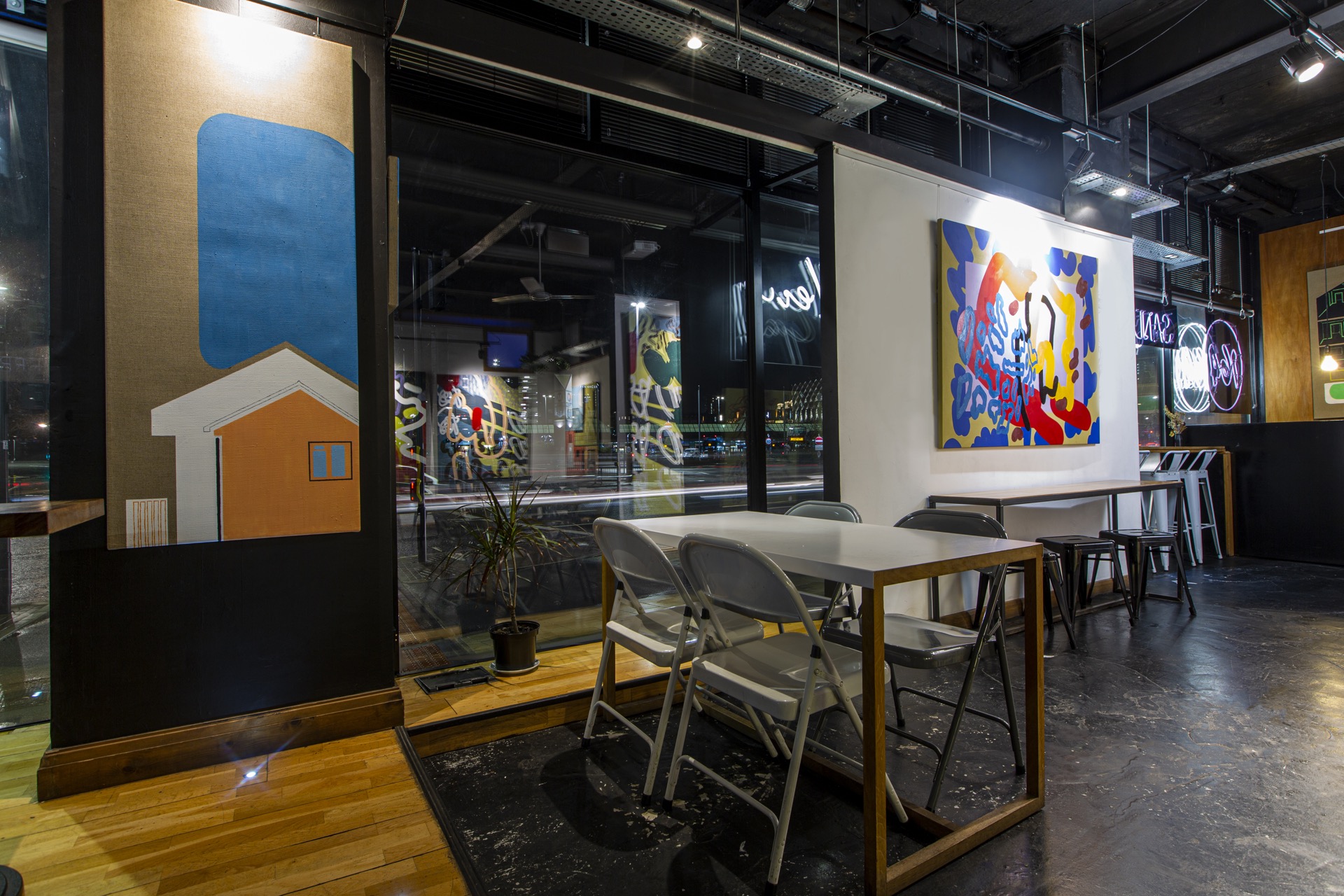 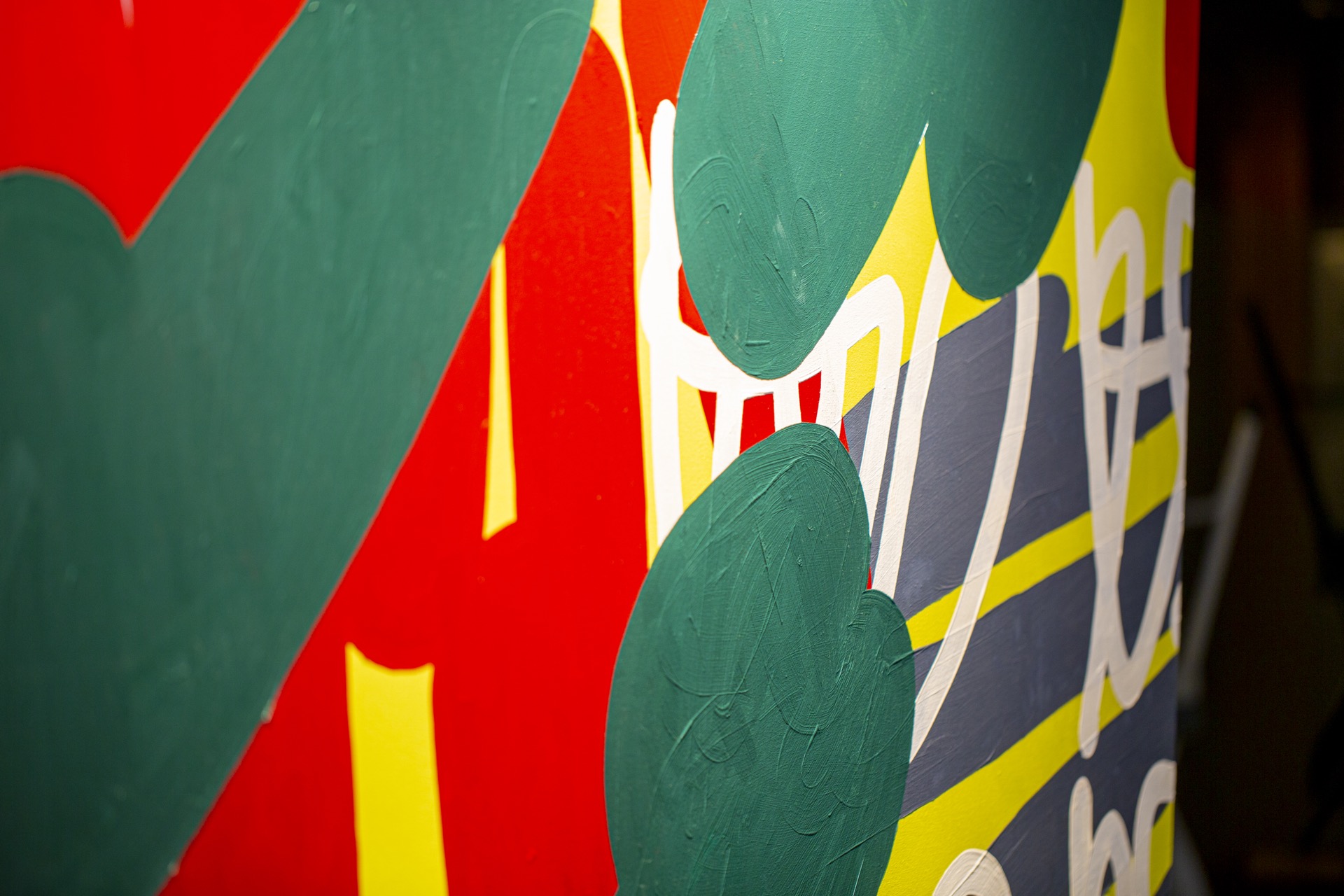 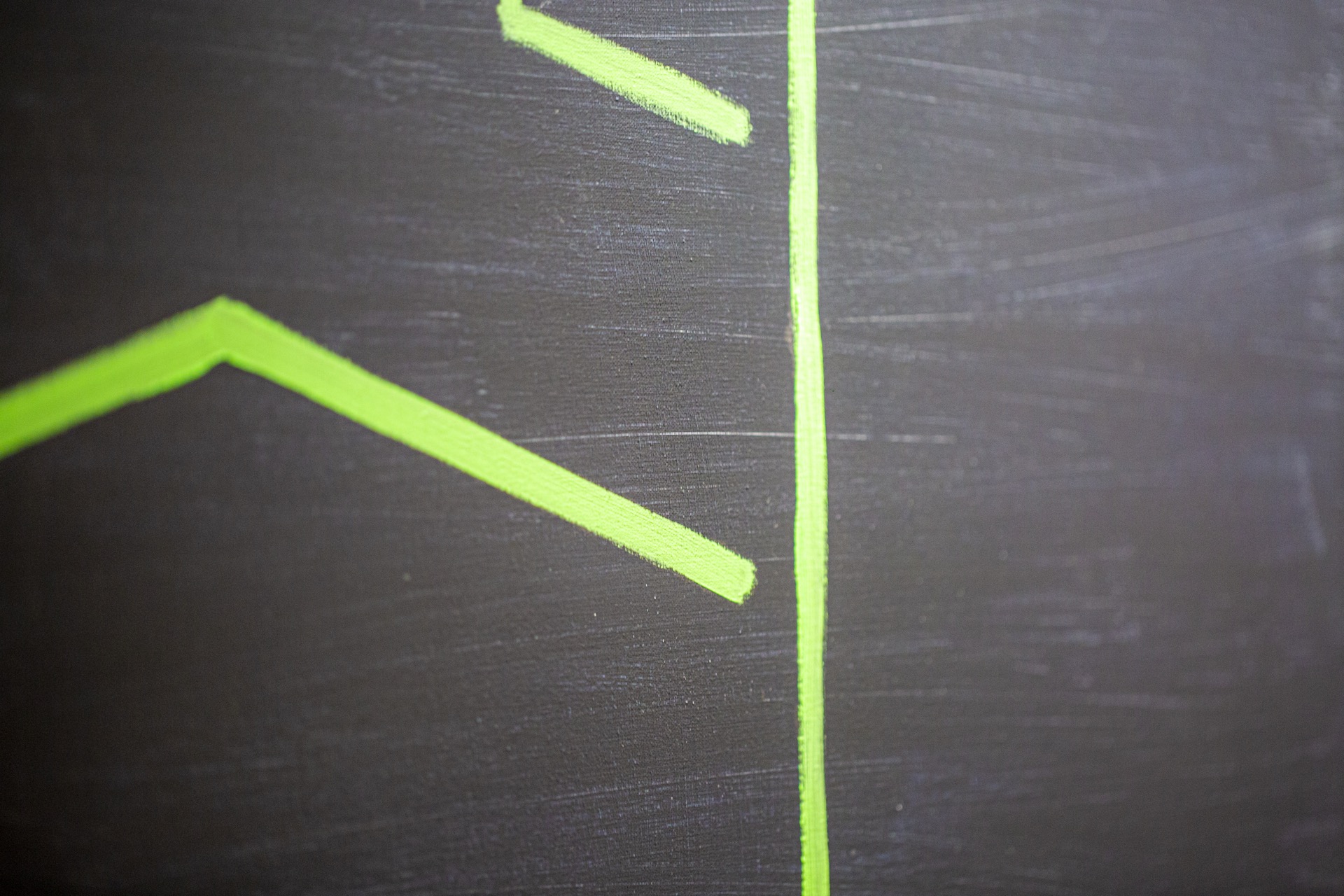 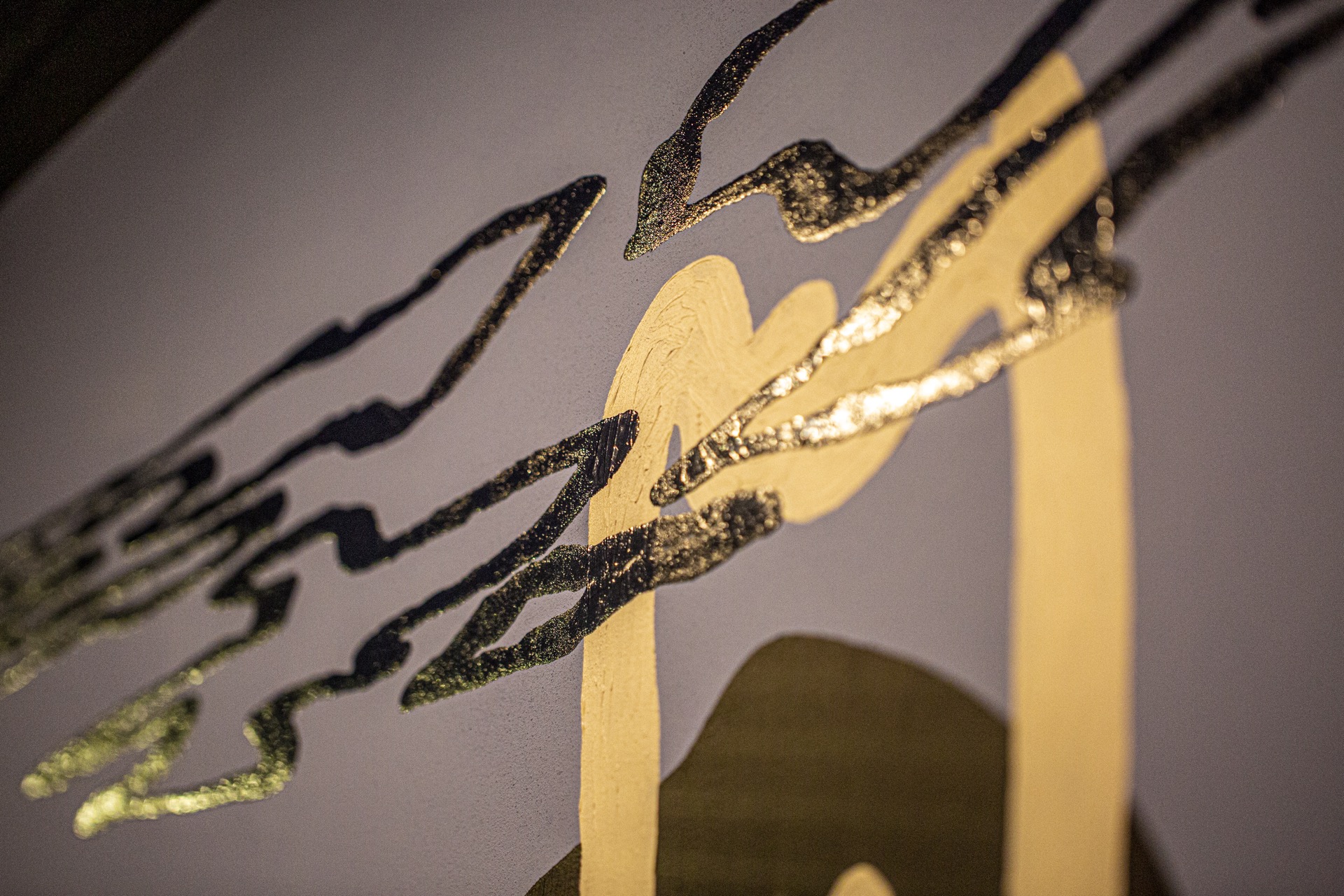 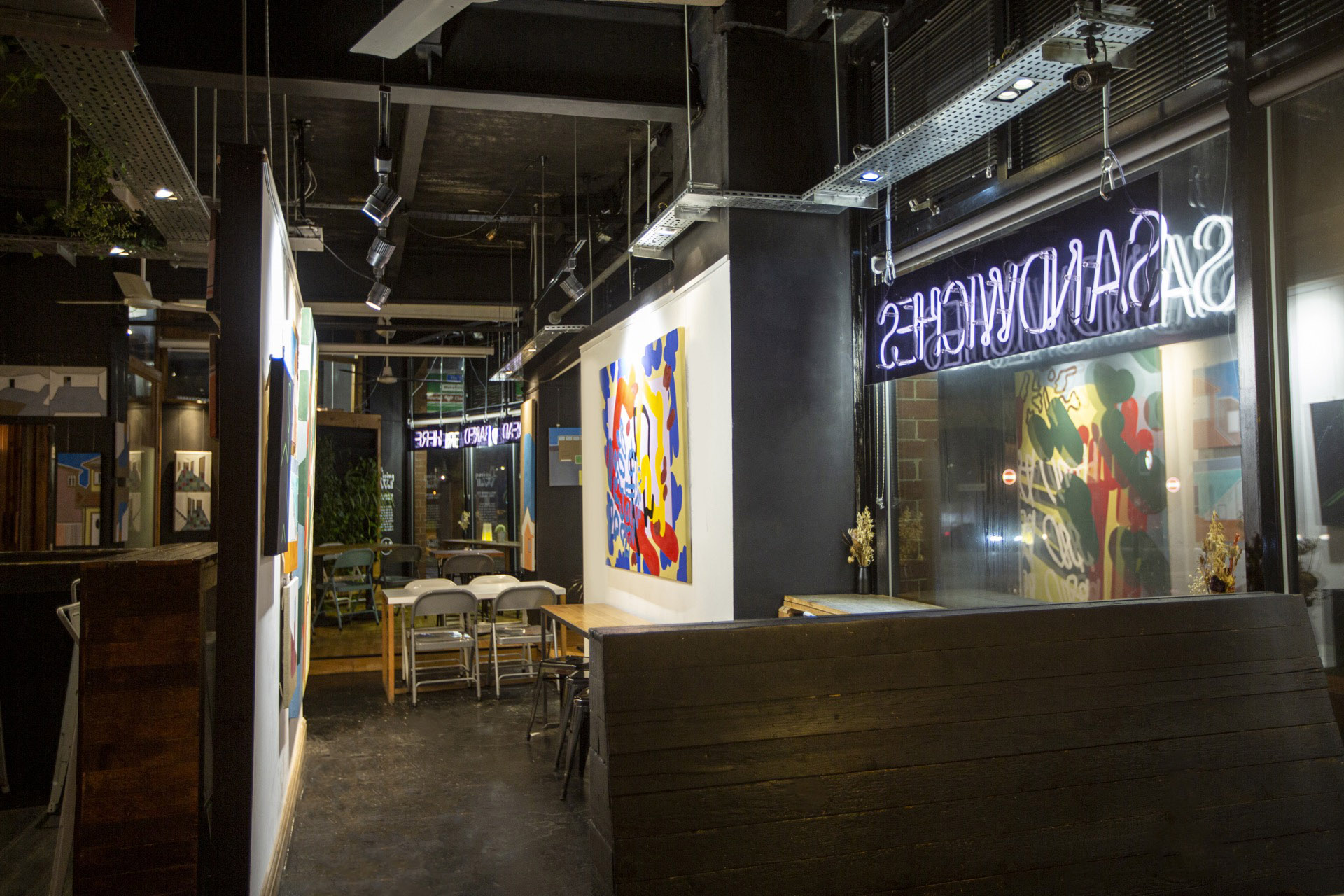 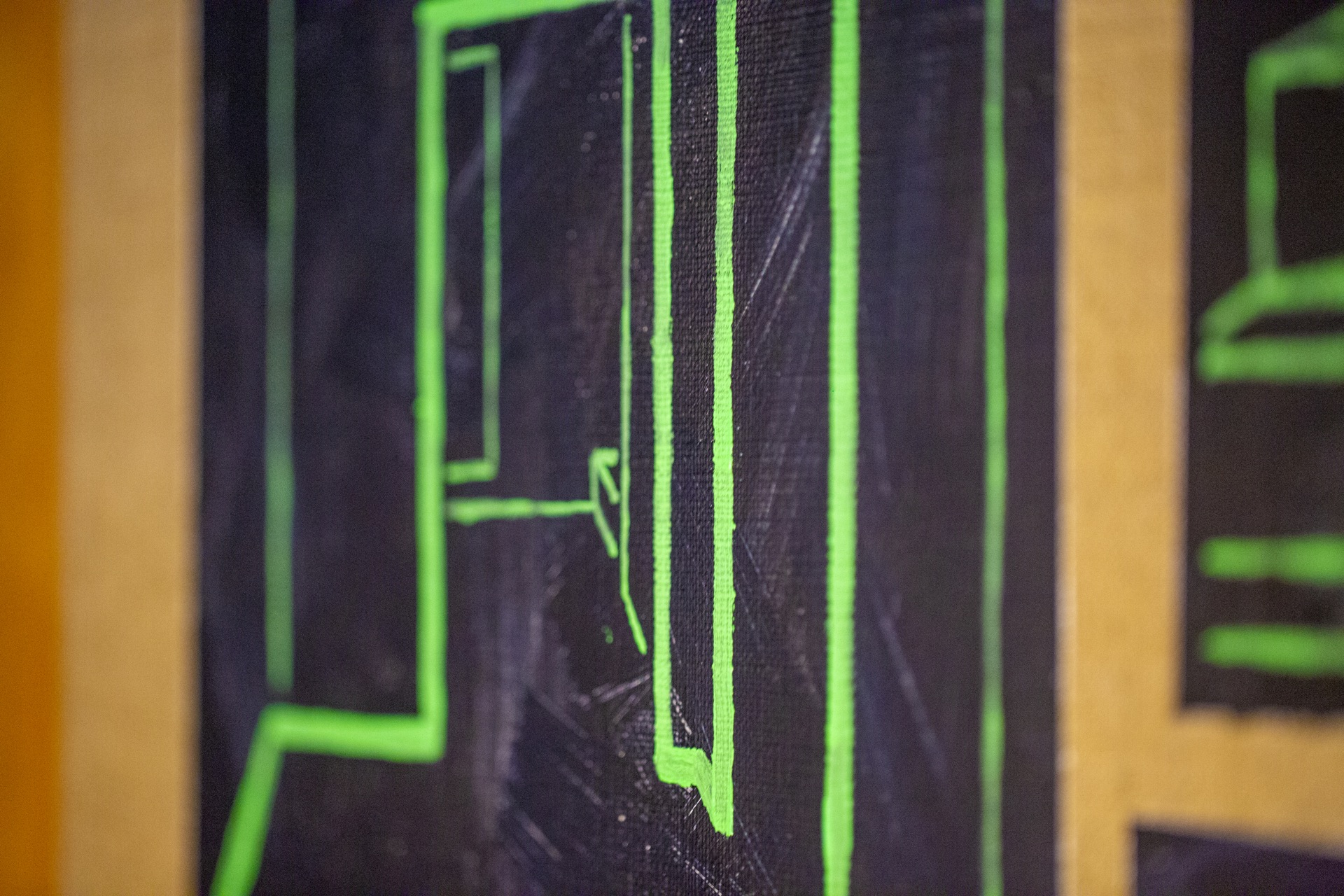 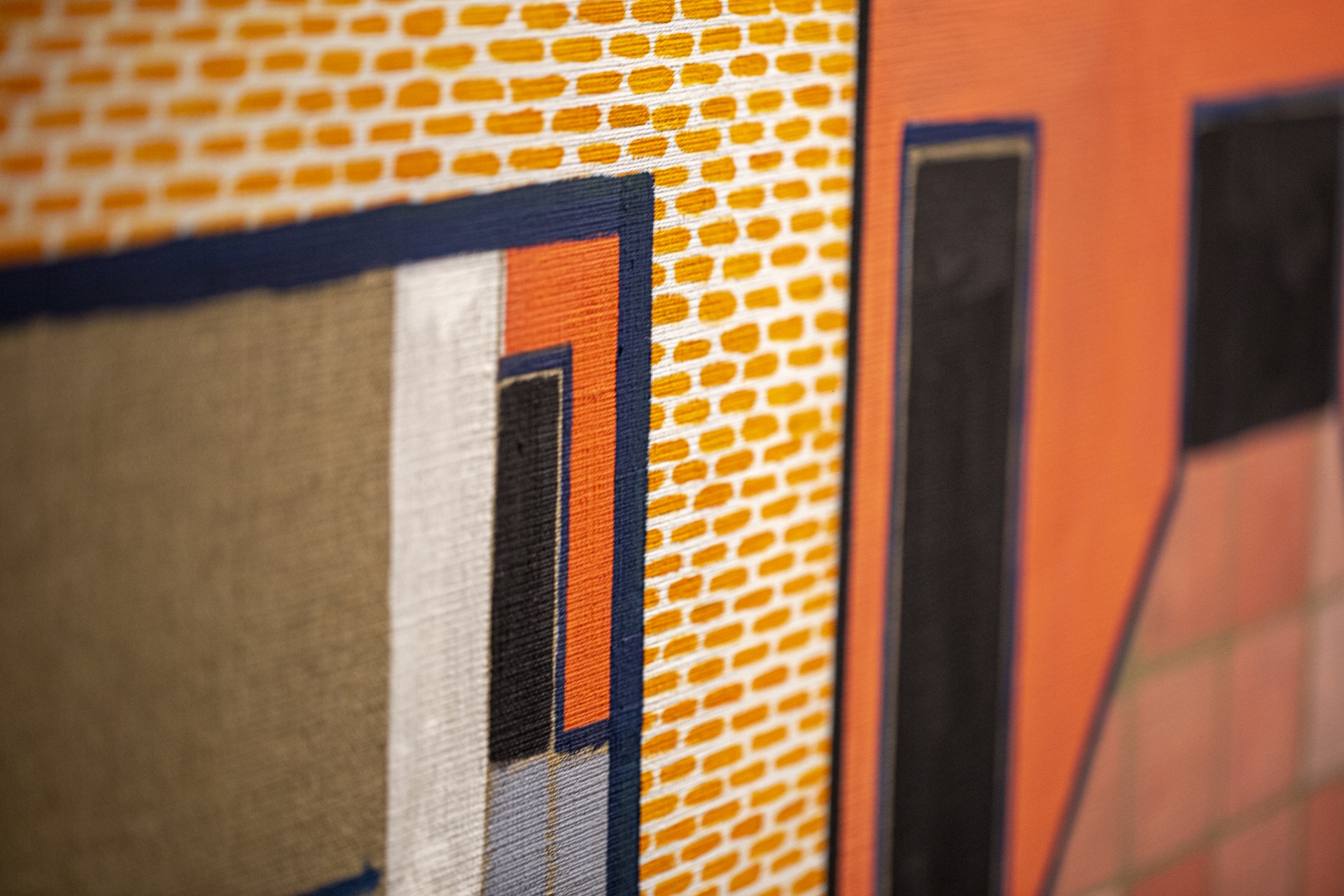 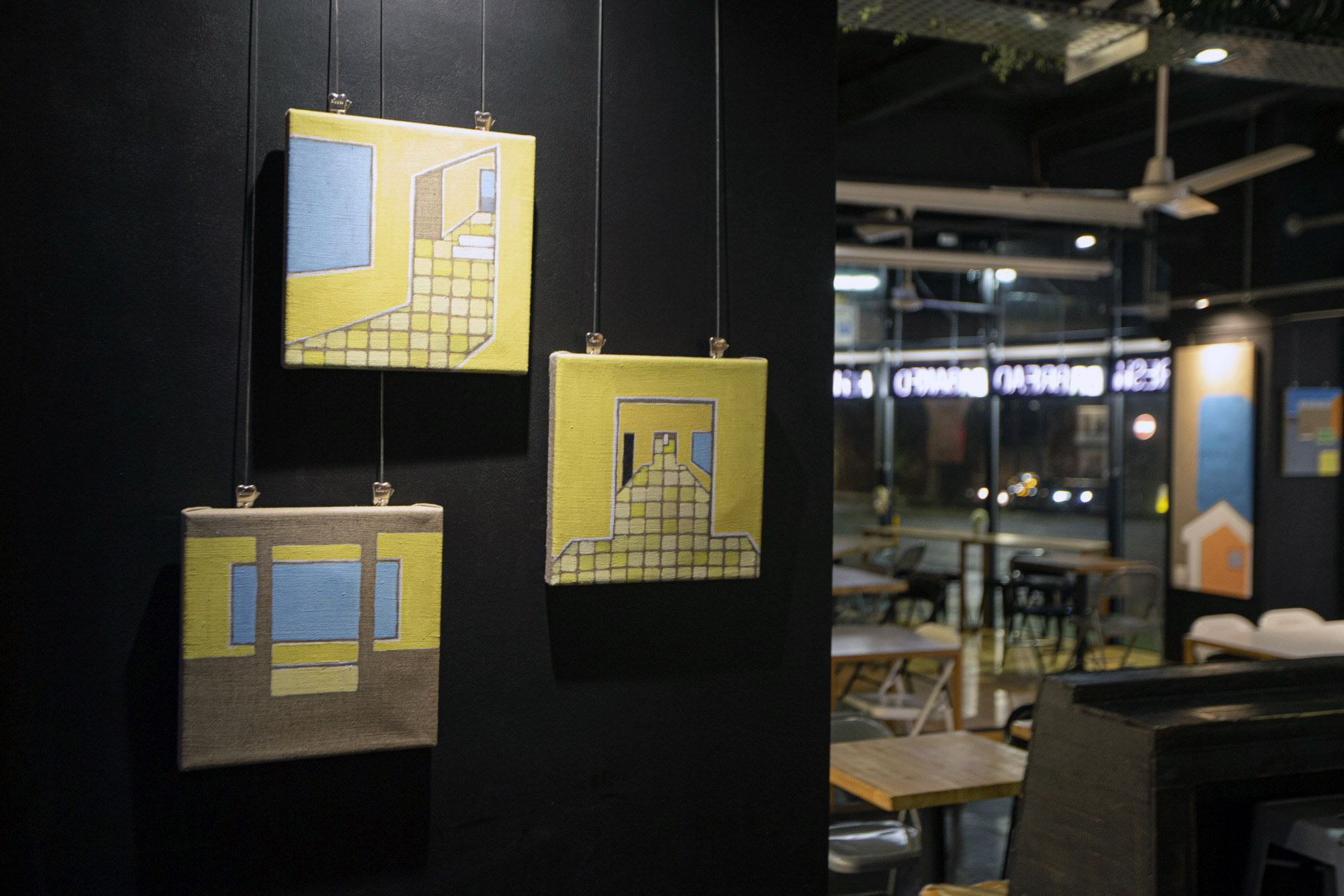 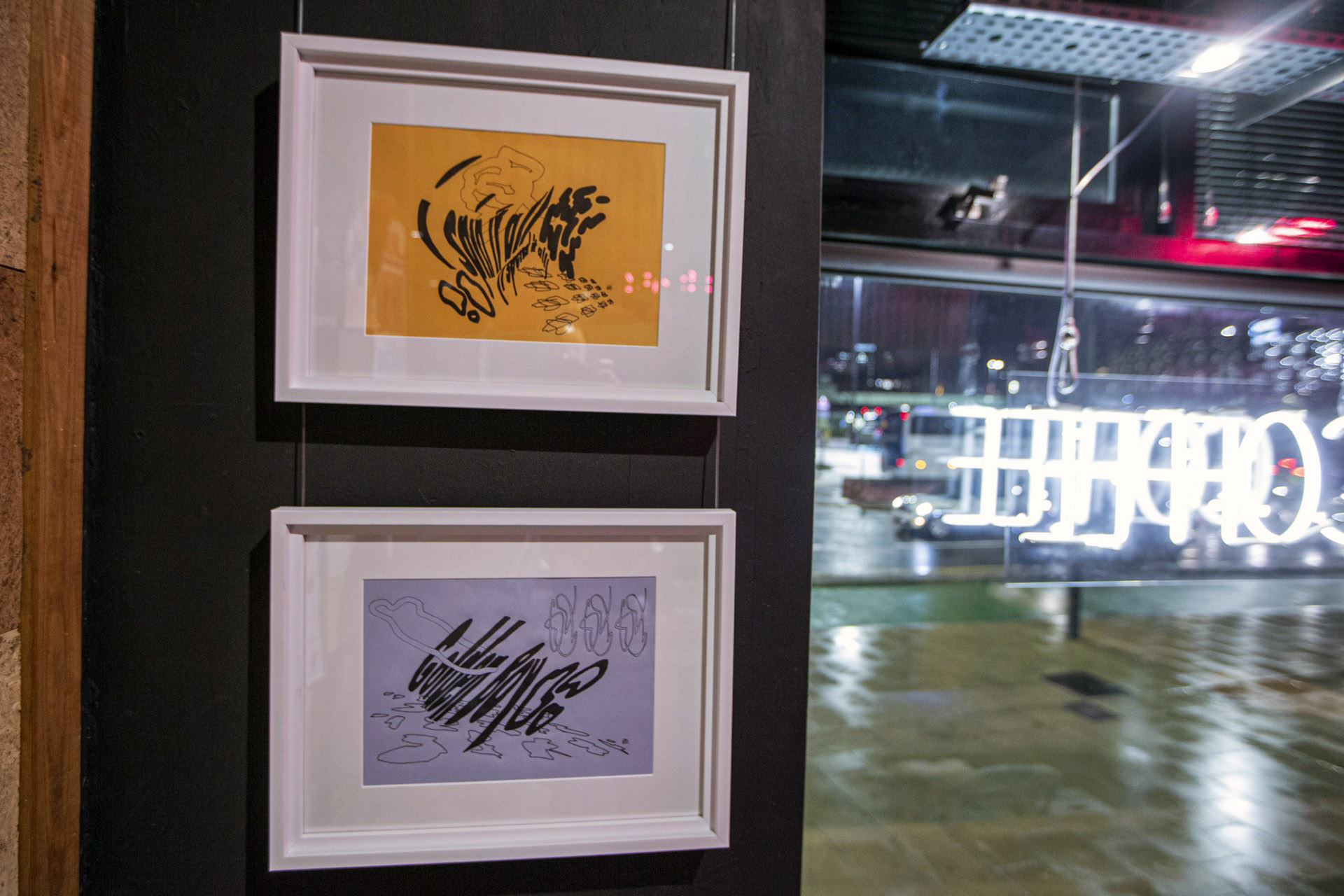 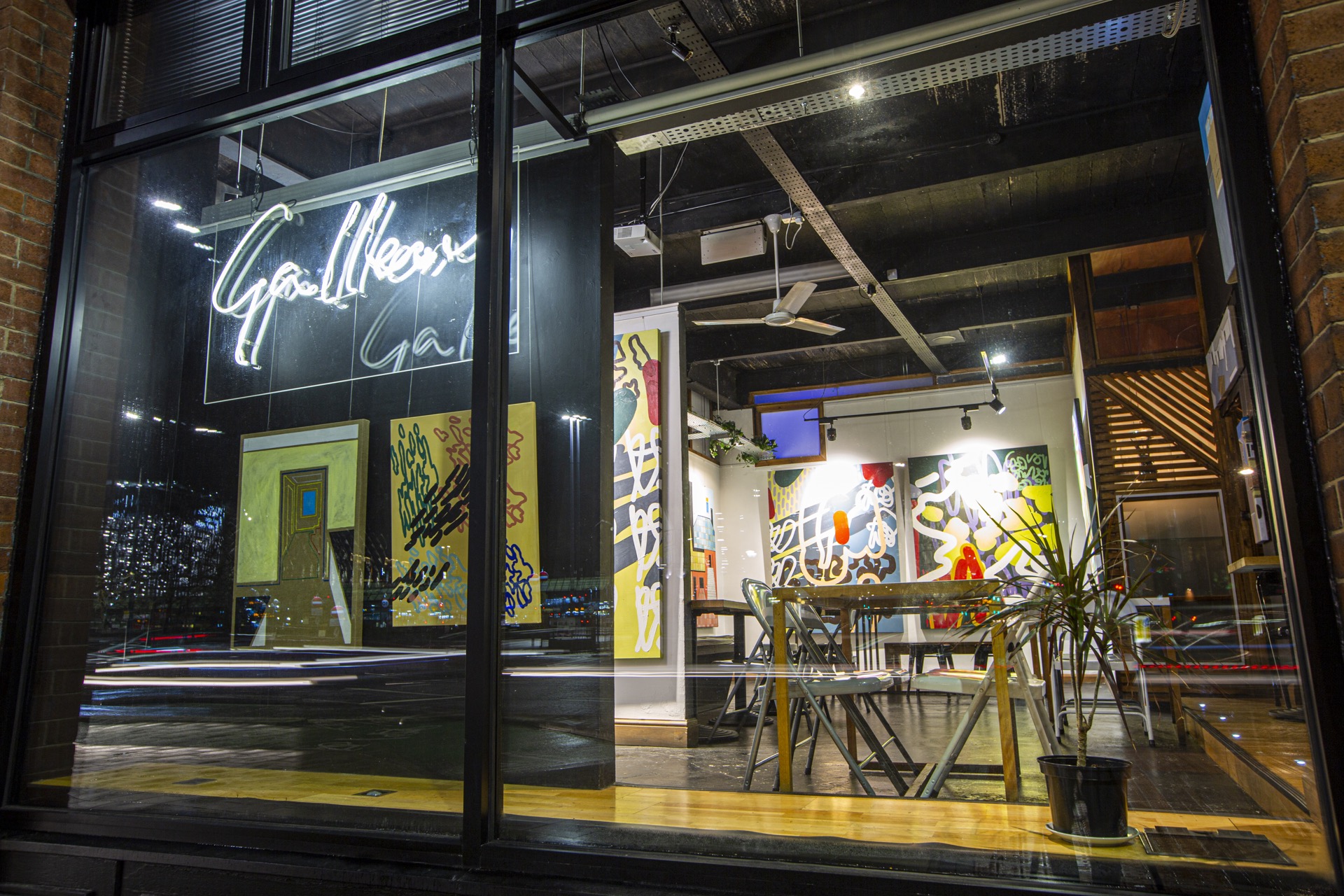 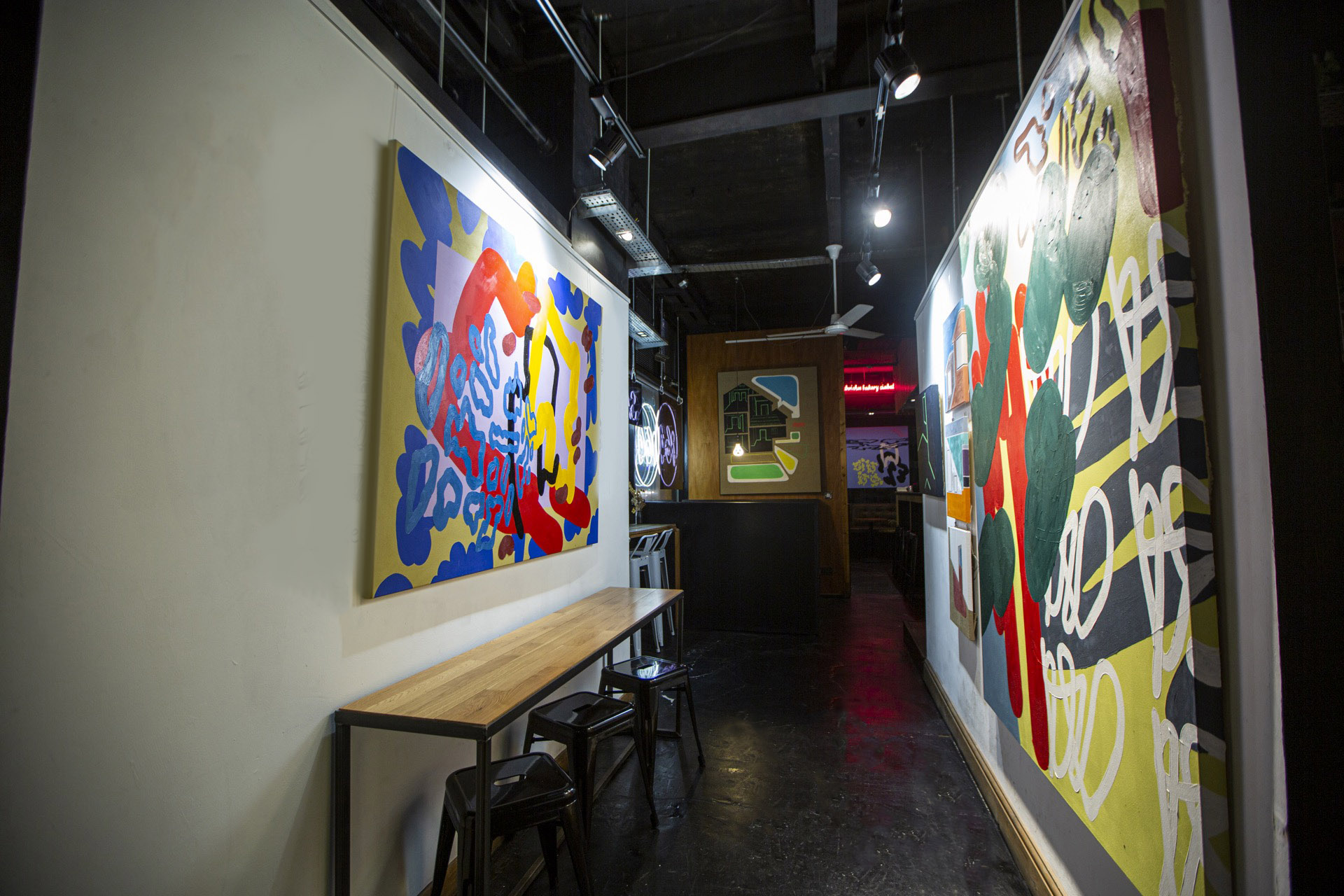 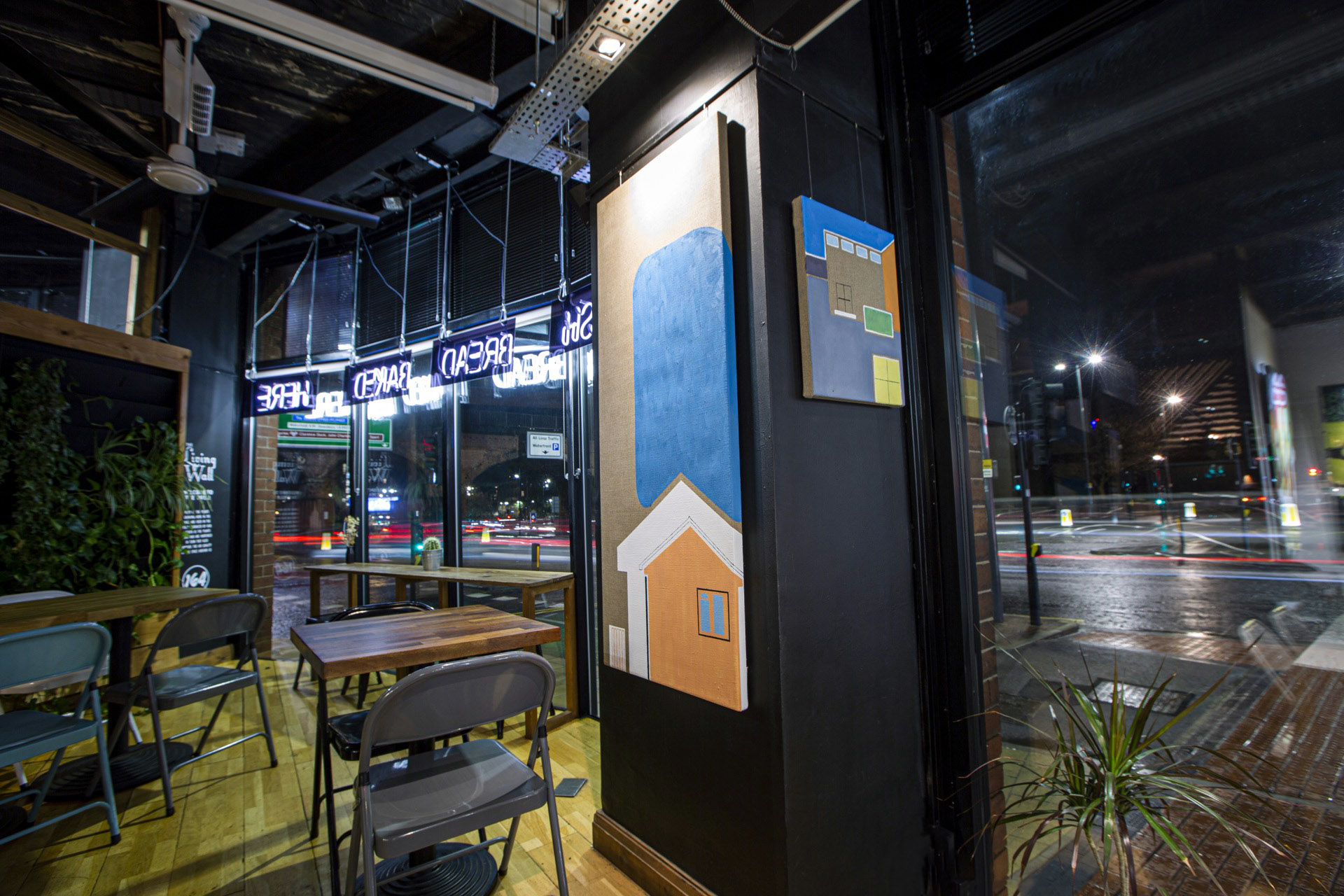 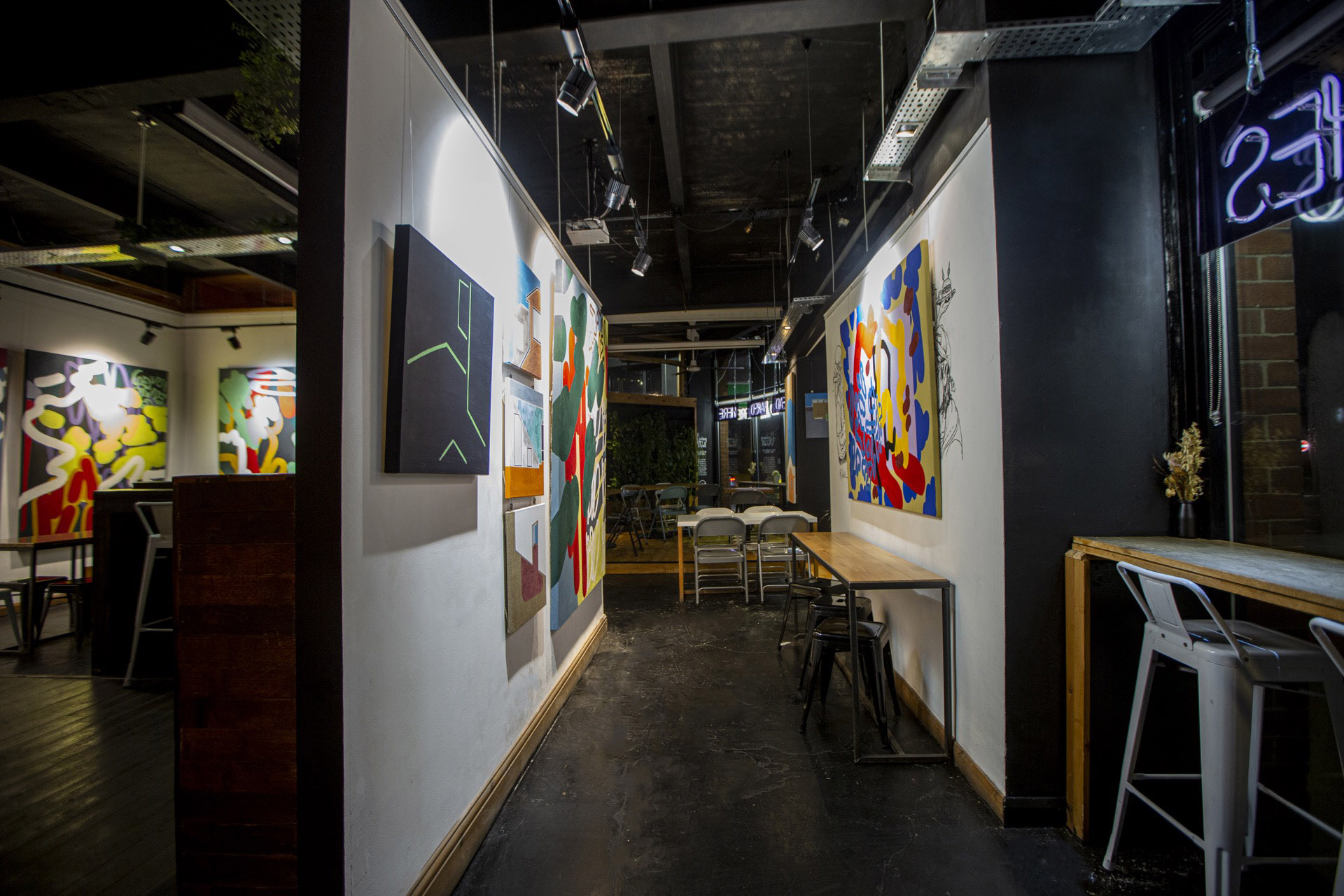 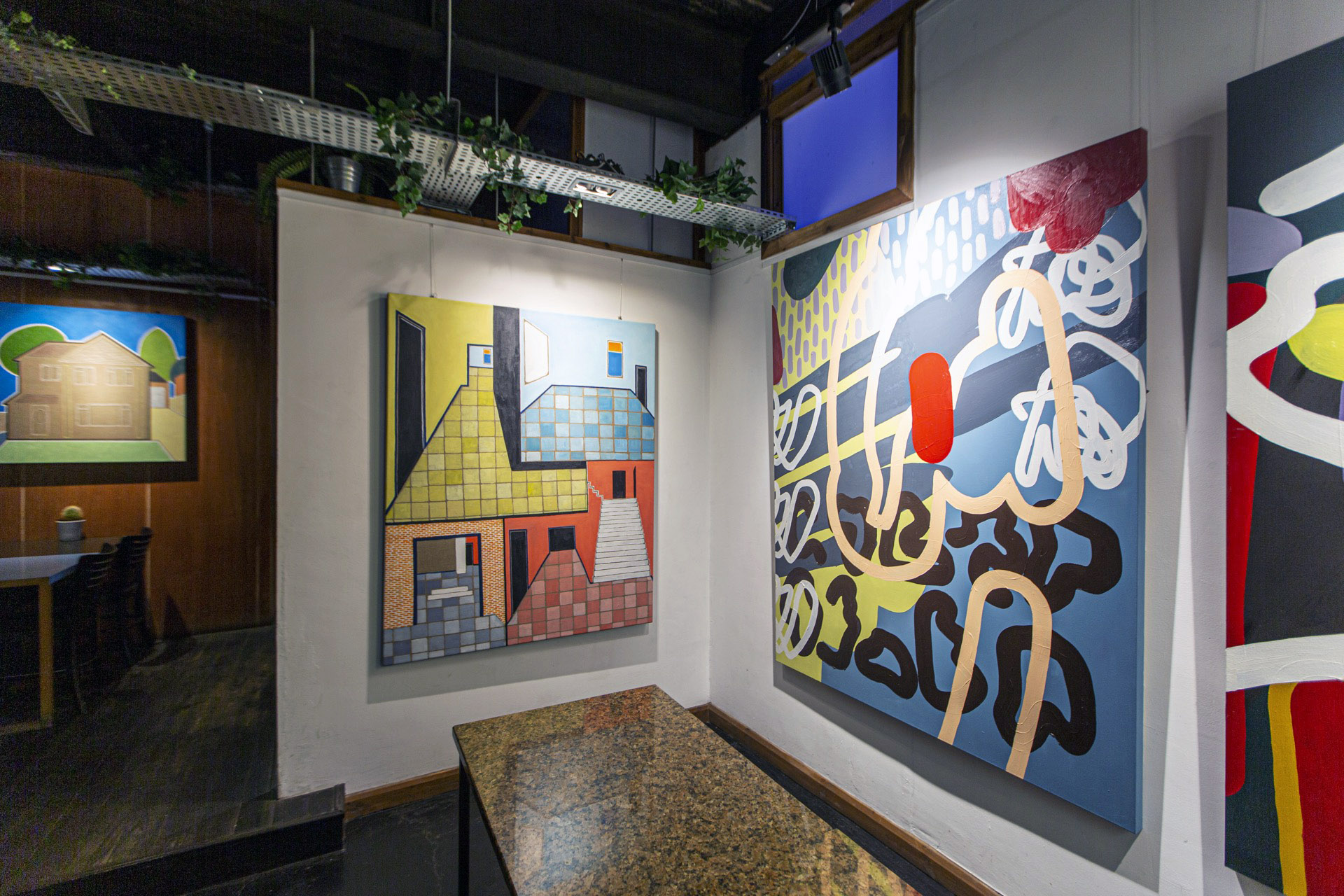 Jenny Beard is a Leeds-based artist working within contemporary painting – her process is built upon automatic drawing, using digital tools to create and manipulate sketches.

Abstract imagery is used to explore optical space, depth, and flatness. The work is open ended and explorative, dealing with the paradox of appropriating abstract marks for abstract paintings.

“The idea of creating an art that self reflectively focuses on and thematizes its own concerns and the correlations of its creation as well as sustaining, at the same time, an open relationship to the world and to meaning as such, came very near to squaring the circle” (Herzog, 1997)

When approaching the work, Jenny is interested in gestures and marks – and when they become signs. Marks are ambiguous, whereas a sign directs us, informs us.

Part of her practice involves pushing paint between gesture and sign. What happens if a mark is isolated – If it is scaled up, repeated, or a pattern is made of it?

Digital methods are embraced in Jenny’s practice, but the work is always finished traditionally and meticulously. Painting doesn’t die; instead digital exploration opens up new ways of seeing and laying paint, which creates a refreshing relationship between artist and painting.

Daniel Harland is a painter based in Leeds, transcribing his memories through the smog of re-evaluation and passed time.

Impressions of form become flat blocks of colour; sometimes solid and sometimes vague. Inaccuracy of memory leads to speculation; an averaging out of potential realities which result in flattened compositions of shapes placed on a surface, separate from one another.

The past is a succession of stories we tell ourselves, to be moulded at will.

Antoine Roquentin, the protagonist in Jean-Paul Sartre’s ‘Nausea’, is acutely aware of this phenomenon. His day to day existence is tormented by a sense of meaninglessness brought on by existing only now, and therefore for no designated purpose. He has travelled the world but, in the present, those experiences do not exist.

Harland works with the concept that we have no evidence that events from our past happened as we think they did. Perhaps other witnesses could confirm that an event took place: a building on fire, a birthday party or a dog getting onto school premises. Only an individual can wonder if they felt scared, were cold or happy. Where the party was held, the breed of the dog and the scale of the blaze can be forgotten and be left as only conjecture.

Over time these details are reconsidered, estimated and assumed to be fact. Harland makes images without anecdote or sentiment.

They refer to the places he has spent time without reference to specific events, people or emotions.

Harland’s paintings are the nearest things in existence to his past.